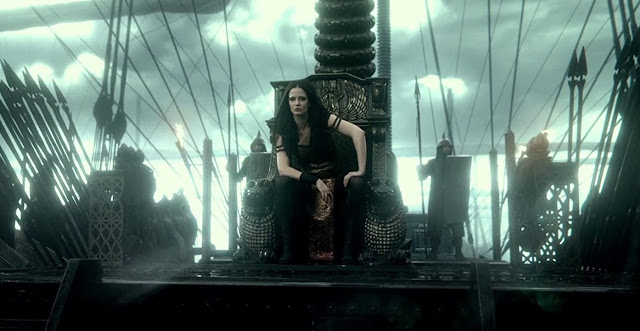 Having had my opinion on The Shape of Water somewhat reversed after returning to it not in a foul mood, I wondered what other films a rewatch of might hold. I duly rented 300: Rise of an Empire as part of my “maybe I made a mistake” series. I enjoyed, nae, loved 300 and was not a fan of this sequel when I first saw it. Perhaps I had held too much hope for this at first and going into a film with high expectations is often setting yourself up to be let down.

300: Rise of an Empire stars Eva Green who I love as an actress and, y’know, in general cos she’s purdy. She also seems to get naked in everything. It also stars Lena Heady (great), Jack O’Connell (great), David Wenham (surely the narrator of Deadliest Warrior, which was great) and Sullivan Stapleton (who?). Seriously, who the hell is Sullivan Stapleton? Apparently he’s been in a few films I’ve seen but I don’t remember him and I’m certain it’s not because he’s a chameleon. He’s pretty asinine here as well.

The plot is, oh come on if you’ve read my reviews before you know what I’m going to say. The plot of Rise of an Empire is irrelevant; because I love you here it is anyway though; the Persians are still all up in the Greeks’ grill and some clever bollocks writer had the idea of setting much of the film at sea so it’s all different and that. People die deaths and that is where my problems with Rise of an Empire begin.

CG claret is something I’ve ripped on in the past and here it is instantly annoying. I normally enjoy gore and blood-letting but this is neither eye catching, brutal, believable or inventive. It’s obviously added and very distractingly bad. 300 relied on gore and action over drama and 300: Rise of an Empire does even more so- adding bombast, too. Rise of an Empire carries much less weight dramatically (a feat in itself) and if the violence doesn’t entertain you’re not left with much. It’s not as if you can fall back on the plot. 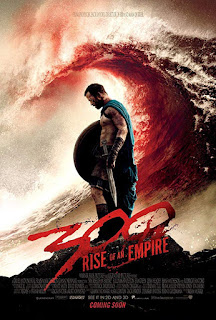 The other issue with Rise of an Empire is that there’s no discernible good or bad guys, and not in a clever way like The Wire managed. I think you’re supposed to root for the Greeks, but then Eva Green’s character is kind of sympathetic. They all kill people and strut around homo-erotically.

At some point the thought struck me that Rise of an Empire might be in some way based on history. Is it? If this is history then I have new reasons to hate history beyond my GCSE teacher. I got suspended for calling her a cunt. I failed GCSE history. Who’s laughing now? No really, who is?

I really, really had to push myself to reach the end credits of 300: Rise of an Empire rather than turn the film off, which whenever I do I feel guilty about as a reviewer. However I’m also a fan, not paid and long enough in the tooth to know what I do and don’t like. Plus, and I say this a lot, it’s my website and I make the ever changing terms of engagement. I made the end, but only just.

I initially scored 300: Rise of an Empire two out of ten and while I very much hoped to be proven wrong, I wasn’t. Here is a film which a rewatch has emboldened my dislike. 2/10

if you like me complaining about a film I didn't like, check out these other reviews!
THE LIGHT BETWEEN OCEANS
FORTRESS
GRAND ISLE
THE BEGUILED
KING OF NEW YORK
Labels: 300 Action Adam Thorn Adventure Bedsit Cinema CGI Eva Green For Your Eyes Only Forest Hill Gore Review Rise of an Empire