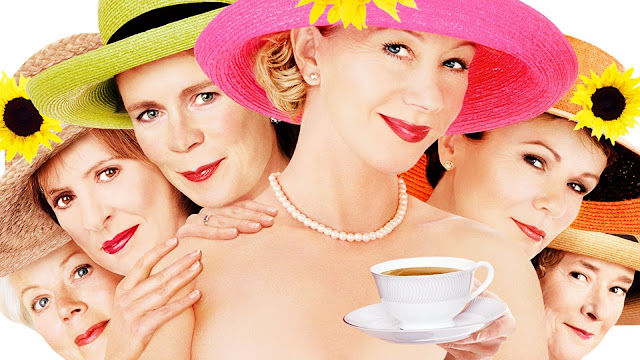 After the Maximum Violence Season here on Bedsit Cinema, which you have to check out, I wanted to dial it down and go back to being a bit more eclectic. I’d actually seen Calendar Girls before, at my Dad’s amateur dramatics theatre (Chipstead Players) a few years ago. It was very well produced, and I was sitting with the local Women's Institute (WI) who were an absolute joy and perfect company given the subject matter. I’d not seen the film, though.

The film is based on the true story of a WI group who, after the death of one member’s husband to cancer (my Dad played this role), decide to raise money for a local hospital with a saucy nude calendar. It’s all titillation of course, there’s no beaver shots; although I’m pretty sure Helen Mirren has not been a stranger to those over her career. That's not having a go- I've happily whipped my old chap out for my brother's art over the years. You only get one life and one willy, or whatever it is women have, I can't remember. Moving swiftly on!

The only things more English than the WI are hypocrisy and Richard Curtis films. Everything about Calendar Girls is middle England meets hypocrisy writ large. The ladies are doing nothing obscene, but challenging the prudism which prevents anything thought of as impure. As Bill Hicks said, it’s a tightrope these religious types walk. “Against sexual thoughts, but also believe we should be fruitful and multiply… we could sing hymns through it?”. On hymns, if you don’t like Jerusalem (the song not the deadly, contended city), swerve Calendar Girls as they sing it A LOT. 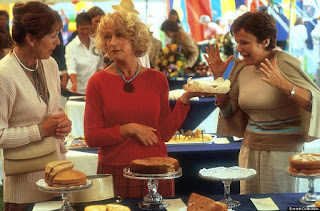 All of this, however, is exactly the point of the film. Challenging accepted norms, facing the establishment. If one person believes one thing and a thousand others believe another, does that make her wrong? Of course it doesn’t- but you have to be brave to stick to your belief. I warmed to Calendar Girls, laughing more and more as the story went on. Most of my favourite UK female actors of a certain age (Helen Mirren, Julie Walters, Annette Crosby, Penelope Wilton, Geraldine James) star. Because of this, there isn’t a bad performance.

Just as an aside- it’s weird seeing Ciaran Hinds looking less grizzled and not playing a king (Julius Caesar/ King Beyond the Wall).

Calendar Girls was never aimed at my demographic; a thirty something bloke who does things such as enjoy focusing solely on violence for a few weeks just for fun. Despite that, it’s hard to take issue with this kind of gentle, heartwarming comedy with a soupçon of message. It’s also a kind story, no character is truly bad, even the antagonists. In short Calendar Girls is really for everyone- and I’m one of everyone!

I just said it’s for everyone. Like cucumber sandwiches (which are disgusting but you pay through the nose for in Claridge's), casual racism (every country in the world), tea (Chinese), blow jobs (surely the French) and just generally being thoroughbred English (half Irish)- Calendar Girls is for everyone. I enjoyed it, even though it wasn’t for me. Like blow jobs. I hate giving them. Plus my Dad didn't die in this one. 6/10 depending on how much you like cucumber and buggery.

Sometimes we need softer. Check these reviews out!...