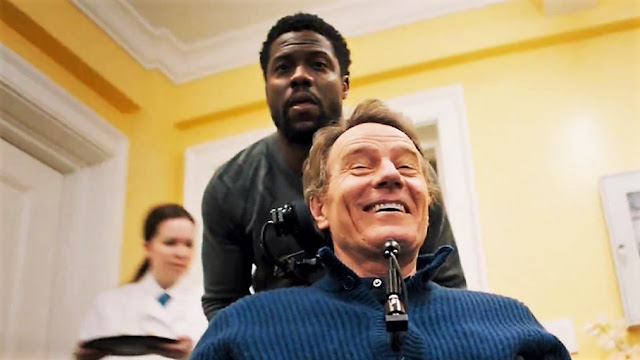 My notes for The Upside are blank.

We've all felt the way I did. Tired one night and not in the mood for anything, flicking between five minutes of a computer game, to half a TV show then back to another game I eventually settled down and put on The Upside. I held no hope for finishing it. I was wrong, so wrong. I emphatically finished The Upside.

There are no notes in my pad for The Upside because I couldn’t take my eyes off it, and was laughing too much to even think about documenting my happiness.

A remake of the most successful French film of all time (The Intouchables), The Upside stars Heisenberg Brian Cranston as Philip, a billionaire who is now quadriplegic, disconsolate and depressed. Ex-con Del, played by Kevin Hart, accidentally interviews for a job as Philip’s full time carer, gets it, and their up and down relationship is the epicentre of two hours you will not regret. Even if you hate Kevin Hart which I understand is a thing but not in the Cinema.

I don’t want to talk too much about the plot, but the chemistry between Cranston and Hart is astonishing and for me surprisingly unlikely. There isn’t a dull moment and while, yes, much of The Upside is predictable it isn’t a film designed to throw you curveballs- just to make you engage and enjoy. As is evident by my pad reading “The Upside (2017)” and nothing else, I engaged and enjoyed. 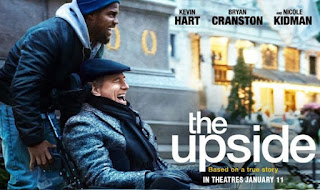 Despite only being a 12A (I genuinely am often put off by a film with one of the lower certificates which I am aware is utter, unsubstantiated, prejudice) The Upside has a lot of material in it I was surprised they could include in a film of its rating. Hart’s quickfire patter and Cranston’s cantankerousness play wonderfully off each other. The power dynamic between the two is very interesting, and central to the film as one has all the money and essentially owns the other, but at the same time cannot enjoy life without him. It’s either going to go one way or the other.

Equal parts comedy and drama, The Upside is a wonderful, mostly happy reminder of the importance of human relationships- something sadly becoming a thing of the past.

I cannot recommend The Upside enough, not least because it is suitable for almost all. An easy, but thoroughly funny and agreeable watch. The power of two, the beauty in meeting new people. Loved it. 9/10

Feeling good? Feeling down? Feel some of these reviews...