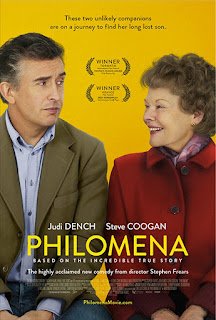 Tagline: “The true story of the search for a lost son” *Adam thumps head on table, knowing the next section is now redundant.*

Premise: *Clears throat* It's the true story of the search for a lost son!

Execution: When I told my mum I'd seen Philomena she said, “really?” in that way that only mothers can. As if I'd make up something so mundane to start conversation. Yes, I actually bought this film myself, and I watched it on my own, OK? Being single for so long, it's sometimes nice to watch a film you wouldn't pick normally. Except that I did pick it, to remind myself what it was like to be in a relationship. Afterwards I fought with myself over the washing up and went to bed without having sex. See, love is the real winner here. I think. I don't know. I'm not talking to myself at the moment.

My arguing split personalities aside, Philomena is one of those wonderful little films which really delicately takes you through some actually pretty heavy themes. Love, loss, family, sense of identity, the bastard clergy. It's like a Jacques Audiard film meets The Magdalene Sisters, only as I say, gentle. You could watch this with your nan. I mean I couldn't my nan's dead, but you get my point.

I really don't need to go into the plot, the ten word tag line does that all for you. It has Steve Coogan in it, who's very good, Judi Dench is very good, and Wunmi Mosaku appears too (Maxine Martin from In The Flesh)!


Bedsit it? Yeah, an especially good date night film if your other half isn't a zombie fan. You'll laugh, you'll cry, you'll fall out over the washing up and not have sex. Just like real life! 8/10
Labels: Bedsit Bedsit Cinema Cinema Comedy Coogan Dench Film Philomena Rated Review