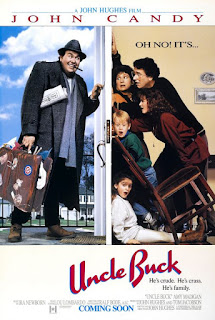 Tagline: “He’s crude. He’s crass. He’s family” I imagine my family relate to this more than I do.

Premise: Slobbish but warm Uncle Buck (John Candy, yay!) comes into the lives of his nieces and nephew after his stuck up sister in law and pussy whipped brother have to go to her father’s sick bed. Teenage niece (Jean Kelly, no relation) is a bit of a bitch, which she gets from her mum. The two small kids (Macaulay Culkin and Gaby Hoffman) are hilarious and say and do funny things like what grownups do but because they’re little you go “aww”. But can Uncle Buck parent?

Execution: Uncle Buck is another film I had suggested for my reviews, and it was a weird request for a number of reasons. Firstly, it’s actually rather good, and therefore in no way torturing me as so many seemed so keen to do. Secondly, quite a few people wanted it reviewed, which is odd because it is almost thirty years old and I can only think of one reason why they might, which is that it is a Christmas film. Or rather a film people associate with Christmas, which leads me to… Thirdly, Uncle Buck is not a Christmas film.

John Candy is one of my all time favourites, I love him. I think the reason I love him is because he reminds me of Tony Hancock. He’s like an American Tony Hancock. A fat, Tony Hancock, basically. Candy’s mix of affable charm, pathos and self pity is very similar to Hancock’s, although he played a wider range of characters, using these attributes in different mixes. He’s not hard to root for, Candy, and his Uncle Buck stirs a love somewhere between favourite fun uncle and the best moments when you thought your mum or dad were being dicks but really they had a solid point and you ended up learning something against your will. Plus, he threatens violence on horny teenage boys and I think anyone who’s spent time around teenage boys knows that feeling.

It’s not exactly ground breaking, Uncle Buck, but the humour is timeless and the messages it contains are harmless. I think the reason I’ve been asked to review this is because it gently reminds us all of being little, of nice memories of our family, and of our innocence. Because we’re not young anymore, our innocence is lost and we and everyone we know will wither and die. So we get over it by watching Uncle Buck. Seems pretty straightforward to me, who can blame us. Uncle Buck, whilst not a Christmas film, does have a Christmas film feel, it is to festive film watching what a korma is to curry eating, a gentle start.

Bedsit it? I get called Grinch quite a lot, mostly by Em and my sister, but even I get that little strange warm (happiness?) feeling when I watch Uncle Buck. So yes, it’s a lovely little film that’s not too sentimental, and has a bit of something for everyone. 8/10
Labels: 80's Bedsit Cinema Christmas Cinema Comedy Family John Candy Uncle Buck