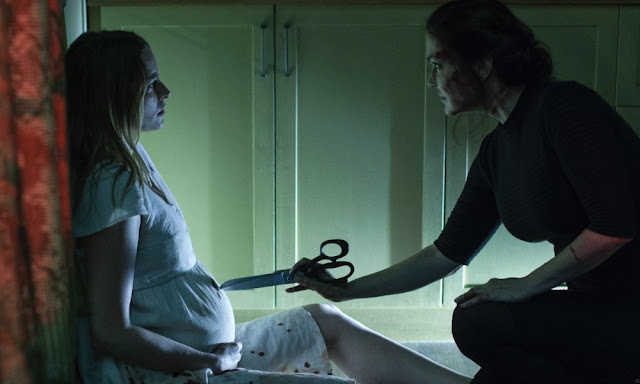 As you can imagine, the horror entry to the Maximum Violence season was a hard pick. Eventually I settled on the most unsettling and violent horror film in my opinion (that I have seen). I thought about reviewing Martyrs, which you also must see, but I liked the simplicity and less philosophical violence of Inside. It’s also far more gory in the fun way, if such a term can be used for this film- given it involves someone trying to steal an unborn baby.

After a car accident in which she loses her partner, heavily pregnant Sarah (Alysson Paradis) has shunned family and friends to stay at home on Christmas eve. This does not turn out to be a good decision, as someone turns up who wants to hurt her. That’s the plot and while it is simple it is all it needs to be, because bloody, shocking carnage ensues.

Inside has the very French warble warble score. I’m not sure if warble warble is a musical term. The music sounds like it was made not by a musician, but a nutter with a keyboard, a drinking problem and a metronome. Wa-waa-wa-waa. That score is the film’s high point of happiness, as darkness falls and the bleak story becomes more violent, disturbing... and enjoyable! I think. People made and have bought and surely like watching this film, so I can’t be alone in loving it?

When it kicks off there is gargantuan gore, but Inside is also beautifully intense. In places it allows you to simply be stressed and terrified at what awful event is headed at your eyeballs next. This is what makes the film better than it might be in the hands of less capable filmmakers. Directors Alexandre Bustillo and Julien Maury deserve props for this.

For such a short film, I’ll admit Inside does feel as if it takes a bit longer than needed to get going than it perhaps could, but I think that’s deliberate teasing. Nobody (surely) thought before seeing Inside that it was anything other than maximum violence? When the murderous mayhem materialises, it is relentless. There’s so much going on during Inside's brief runtime that it feels like a much longer film. It is 82 minutes of pure terror. You won’t want it to stop. Those minutes are brilliantly brutal enough.

Inside achieves the rare feat of genuinely wrenching my stomach contents up into my esophagus- tasting lunch and bile. I loved it, but then I had eaten a nice lunch. What does horror mean to you in a film? Horrible? Horrifying? Inside is both. The antagonist, only known as “the woman” (Béatrice Dalle), is brilliant. Sadako-esque inescapable, but she brings with her destruction which will cave your head in. Just when you think it can’t get any more shocking, Inside does, and it's great.

A tsunami of terror. Vile, visceral, awful, depressing, and yet bloody brilliant. Far from my first viewing but I was sucked into my seat wide eyed nonetheless. 9/10

The French! Got to love the French. Try these Gallic(ish) reviews...

WHERE TO INVADE NEXT