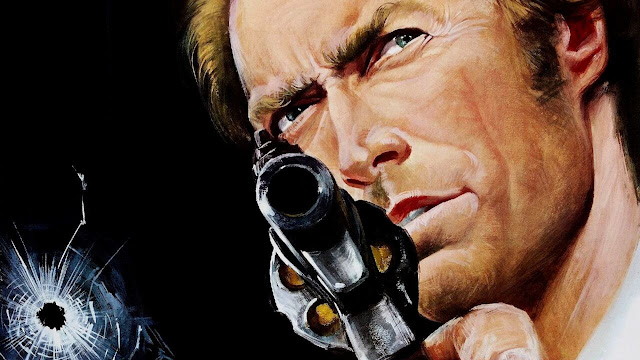 Somehow I had never seen any of the Dirty Harry films and while in a Clint Eastwood binge lately I bought the series and watched them all in order. I wasn’t really sure what to expect, the original is fifty this year. Fifty, that’s half a century! Everyone knows old films are shit and only CGI laden superhero films are any good, so obviously I wasn’t expecting much.

I kid, of course. I recently also watched the entire Rocky series and man are they a mixed bag. I duly expected the same from Harry Callahan’s five film exploits. These reviews won’t go into the minutiae of the plots because they’re basically all the same; murders need solving with a high caliber handgun. I'll try and describe my feelings and some themes I noticed. 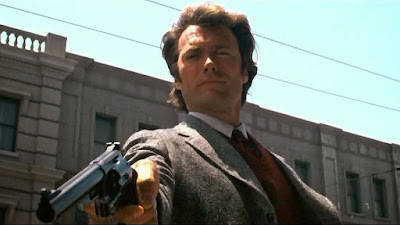 My virgin viewing of the classic Dirty Harry. Harry Callahan is casually racist and a complete perv. It’s less anti-hero, more misplaced seventies machismo. I found these aspects of Dirty Harry hard to watch and unfortunately the set-up, where “The Scorpio Killer” gives Harry tasks to complete, totally reminded me of Die Hard 3. Dirty Harry predates Die Hard 3, obviously, but I saw the latter first and frankly the latter is more fun.

Honestly I wasn’t wowed by Dirty Harry, its most iconic moment is at the start (“Do you feel lucky, punk?”) and the rest of it swerves between dated detective fun and dull, with a senseless story. It needed more mystery and motive for the killer. Saying that I didn’t hate it, because it was violent. 6/10 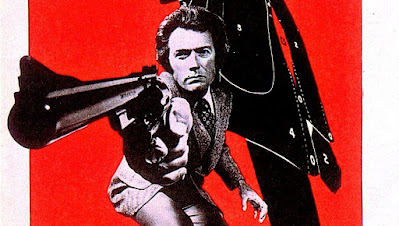 Apparently Magnum Force is Clint Eastwood’s favourite Dirty Harry film, although it’s also allegedly one he ghost directed so read into that what you will. As for my opinion, which I know is why you’re all here? Well.

The characters have grown on me. Not least because Harry is toned down from pervy racist to ever so slightly less pervy racist. The devotion to big hair by all is admirable. Did that die out because so many men resorted to combovers? As my Grandad who died last November said, “there’s worse things that could fall off a man than his hair”. I miss him.

Kicking off the action in Magnum Force is a murder by a swimming pool with major boobage and the phrase “accidental coincidence” pops up. Much like the first film, there’s zero mystery to the killer but that’s not the point, the film is all about the thrill of the chase. The chase here is a lot of fun.

While Dirty Harry is a bit violent, less though than I was expecting, Magnum Force doesn’t have any shame in its violent solutions to situations. 8/10

“That’s a hell of a price for being stylish”

Oh Harry, I didn’t think you had noticed, you lush.

Style is about as noticeable as violence in the Harry Callahan films. In The Enforcer the baddie has potentially the worst haircut I’ve ever seen (outside my new bleach blonde orange). Some minutes in, I think the entire film was deliberately trying to have the most offensive cinematic coiffures ever.

Despite the follicular failures (mine included) I grow more fond of Harry “Dirty” Callahan as the films go on. I wonder how three films in he’s only being properly cool merited a sequel after the pervy racist first, but it was the seventies- things were different then. At this point the series is like watching the social awakening of an elderly relative, learning certain words aren't acceptable anymore.

With all the ever so slightly more adherence to what we now hold to be acceptable socio-political opinion and some Maximum Violence, The Enforcer is only just my favourite so far. Cheesy but great gun. 8/10 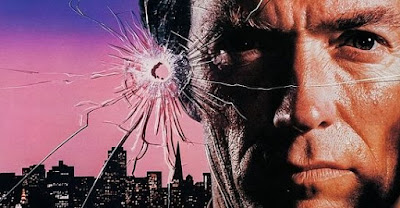 By this point I’ve also learned that the Dirty Harry films always open with a show of badass action. I didn't know that “Go ahead, make my day” was from Sudden Impact! I always thought it was from one of the hundreds of Clint Eastwood Westerns I haven’t seen.

While I'm enjoying them, probably more noticeably because of the binge, The Dirty Harry series are very formulaic and a bit like watching violent, dated television. Sudden Impact dives back into the sleaze the first film worried me with; there’s a rape scene which even for a sexual assault is disconcerting in its portrayal.

While this might be a bit of a weird observation to follow on from the last paragraph, the series does have a sense of humour, a knowing silliness, which keeps it going and crucially away from some of the more troubling aspects of it.

Does Clint Eastwood always stand with that straight back? I think he does. I don't know if that's good posture or not. Are we all supposed to stand like that?

The message of Sudden Impact could be interpreted as that only some murder, sorry, most murder, is bad. Some murdering is fine but only if Harry wants to fuck you. A kind 6/10, but then I let Harry fuck me. 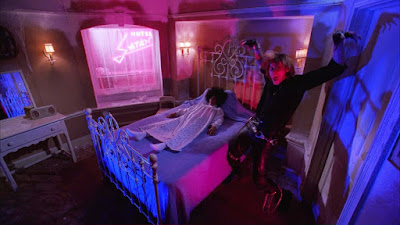 The title keeps making me think of The Dead Zone, which, spoiler alert, is a far superior film.

Clint Eastwood was 60 when this was made. 60 and he’s still making films now! Also in the cast are Liam Neeson, and bizarrely, Jim Carrey. Carrey is good fun and with this performance it’s easy to see how he got the Ace Ventura gig. Liam Neeson’s accent I couldn't work out. Is it pony* or am I just so used to his deep, manly vocal tones I just freaked out that he wasn’t telling someone he wanted to find his daughter or save some Jewish children.

There is a Bruce Lee cop. Is Bruce a weird name for a Chinese man? After my mate Rita told me the English names lot of Chinese kids are given is usually chosen from a popular Western star (she was Hayworth) I bet it isn't.

Of all the Dirty Harry Films The Dead Pool has the most mystery about it. Sadly The Dead Pool definitely decides that women are just expendable lust objects again. This is the first film in the series where I felt bored. The Dead Pool is an obvious end note to an iconic but very dated and formulaic series. 5/10

Overall the Dirty Harry series is a lot of fun which requires you to discard some modern day opinions. It isn’t as violent as its reputation, but the films definitely leans on the brutal and having killing as a fix. Repetitive but fun.

More series reviews, check them out!..

HOUSE OF 1000 CORPSES/ THE DEVILS REJECTS

PLANET OF THE APES TRILOGY