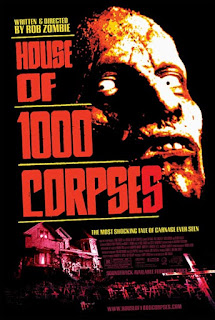 As we edge ever nearer to Halloween, and the Bedsit Cinema countdown of horror reviews becomes a more arduous task than I anticipated as it competes with the new boxing season (my other life running southpawjab.com), I was pleased to be able to find time to watch two of my favourite horror films. House of 1000 Corpses and The Devil's Rejects are nasty, very unique films from the metal legend turned horror auteur Rob Zombie, who has the perfect name for the job, let's face it.

I'm going to come clean at the start as being a bit of a fan of the Zomb, as literally no one calls him. I liked his Halloween films, particularly the second one, El Superbeasto was loads of fun and I'm very excited for 3 From Hell. I will admit that the less said about 31 the better, though.

I first heard of 1000 Corpses while at Derby Uni “studying” film. Other students were raving about it, but being the judgemental prick I am I ignored the weirdos. One of them had a pet rat for god's sake, what could he know about films? However, it wasn't the first of Zombie's pictures I saw, The Devil's Rejects was. I think I bought it from America on DVD back when you could buy region free players, having read a great review of it. Being so impressed, I went and purchased 1000 Corpses straight after. Having seen both a few times now I decided to return to the two, watch them in the correct order, and waffle about them to you in a blog; you lucky, lucky people.

“Why don't you just take your Mama home some chicken and then I won't have to stuff my boot all up in your ass!”

A group of college kids set off on a road trip investigating urban legends and killers in Texas, and get a little more up close and personal with them than they anticipated. One in particular, the legend of Dr. Satan, leads them to an odd museum, which has a delicious sideline in crispy poultry. Only in the South! The victims (I mean, we all knew they were going to end up as chum) are made out to be so wet, so middle class and annoying that really you aren't rooting for them. It's a clever twist and whether it was born of design or by a pervasive hatred of the middle classes which oozed into the film's fabric, I don't know, but I suspect a bit of both. Fair enough.

The youngsters meet the Firefly family; who are nuts, to put it mildly. Though there is somehow something endearing about their psychotic nuclear family, homicidal torturing of strangers and zany, perverse sexual tendencies. Particularly given that the strangers are presented as annoying outsiders. Sheri Moon Zombie, wife and muse of Rob, is a high energy performer and she's off the wall as Baby Zombie, a murderous, satanic Siren, an evil elfin come giggly-schoolgirl with a sadistic streak.

Sid Haig's Captain Spaulding may well be my favourite horror character ever. The clown faced, foul mouthed, purveyor of murder and fried chicken is both sinister and utterly hilarious. While the Firefly family may divide opinion, if you don't love Captain Spaulding then there's something wrong with you, and you definitely aren't cut out for Zombie's films. He's easily the most accessible character in the films, provides some comic relief and a wild card element as you're never sure if he's truly bad or simply amoral and amused.

1000 Corpses is very weird, colourful, crazy, violent, surreal and it's very Southern states of America: fried chicken and violence! It's actually pretty scary, too, which I like. Of the two films, this one is more likely to give you the fear, a sense of dread. It made me think, for some reason, that if Charles Manson had a favourite horror film House of 1000 Corpses would probably be it.  Whether that's good or bad I don't know- I never tried to think too much about whether the fact that the film is so depraved as right or wrong- because I love it.

“That's what they all say "Fuck you", well it ain't gonna save you. It don't scare me none and it don't suddenly make you a fucking hero.”

The Devil's Rejects starts where the first film leaves off, continuing the seventies feel, but the first is a psychedelic horror, whereas Devil's Rejects is a crime road movie come horror. It opens with the police surrounding the house which the unfortunate students from 1000 Corpses, and many others, met their grisly demise. The murderers flee and there is terror, but it lies in the pointless wailing for help, begging, hoping, clinging to life of anyone caught in the Firefly family's trap. The visual and stylistic approach is radically different to the first film.

This is nihilistic horror, cinematic despair and hopelessness. I love it.

There's a disturbing sexual element in the films which definitely is more pronounced in Devil's Rejects, although it is present in 1000 Corpses, too. I wouldn't say it bothers me much in terms of being anything other than a device to impress horror on the viewer, but I could understand if people were put off by it. It's just a movie, remember, don't get a gun in your knickers about it. Wait, is that the saying? I've watched too many Rob Zombie films.

It feels weird saying this after what that last paragraph; but if the Firefly family have a disquieting charm in 1000 Corpses, they're outright terrifying anti-heroes in its sequel. You are certainly expected to be finding Mother, Baby, Otis, Tiny and Captain Spaulding (in particular) darkly funny by this point, as they kill, maim and torture on their own road trip. The road trip in itself is something of a reversal of the first film. Oh, and there's serious debate about chicken fucking, because why not, nothing is taboo in (Rob) Zombieland.

I should mention, because this is a horror review and who doesn't like a bit of explicit violence, that The Devil's Rejects is incredibly savage. More so even than its predecessor in my opinion, as there's a level of sober realism to the gore. However, I don't find the cut off face very convincing and never did, but death by truck is still an outstanding kill scene. So simple, so surprising, so shocking. Well executed, you might say.

Most of the action happens in the day, in the dry heat and dusty streets of backwoods Texas. Tonally more like a Hills Have Eyes where the inbred mutants are the terrifying centrepiece rather then the hidden threat, and the strangers they play with and extinguish mere flies popping on the windscreen as they sweep like the plague across the state on their run from the law. These films are not for everyone, I cannot say that enough, but they are for me.
Labels: Adam Thorn Bedsit Cinema Film blog Gore Halloween Horror House of 1000 Corpses Movie Review Review Rob Zombie Sequels The Devil's Rejects Violence