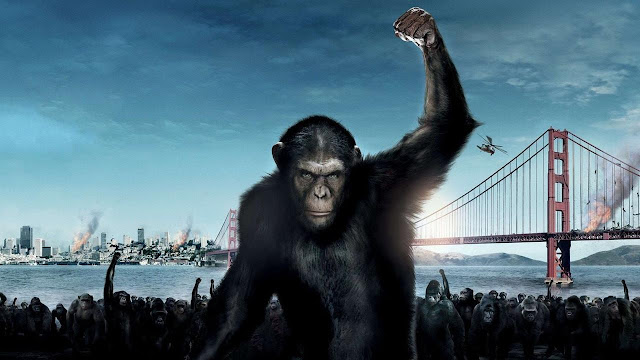 Whereas my Alien marathon was an actual attempt at a marathon, this was simply a rewatch of all the featured films in a short period. Maybe longer than an actual period, but the duration of those has always seemed to be directly related to how much my current girlfriend is annoyed with me. I’m not a doctor, but I am a dickhead who isn’t stupid.

Planet of the Apes (1968) is a Sci-Fi classic that I don’t think I’ve seen since I was a child. Planet of the Apes (2001) I saw in the cinema (Beckenham) as a teenager and it’s not too bad, but not great. The most recent trilogy, utilising top-notch CGI and motion capture performances instead of prosthetics, I initially had very little interest in. This disinterest was mainly down to my fatigue with reboots. Spider-Man is probably the best example, everytime new ones come out there’s something to like then they cock it up in the sequel(s), wait a few years and reboot.

I will refer to the films as Rise, Dawn and War. Rather than a straightforward review of each, I'll try and talk about how and if they connect as a progressive three film narrative. I will score though. 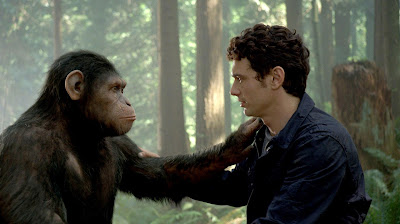 Rise is such a clever re-imagining of the concept the Charlton Heston films were built on, twisting it and adding what I can crudely describe as a humanising of both the apes and the humans. We are not on another planet, this is present day (well, 2011) earth and humans are well and truly in charge. So in charge, in fact, that we’re testing drugs on animals. Which is pure fiction obviously.

In Rise, humans are still arseholes with a superiority concept (which we are) but we’re not all that, there are some good ones. A treatment for Alzheimer's is in late development but the roll out gets locked down. However, some serum is seeped to the apes, and elevates them to our questionable levels of imperiousness. All hell breaks loose as they are awakened to their subjectivity.

The CGI still works ten years on, which when you think about how fast things move and the complexity of animating apes with hairy bodies (hair is incredibly hard to computer generate) is pretty impressive. The action takes a while to get going but when it does you have had time to really warm to the characters mammals participating. It is very satisfying and I cared what happened- an underrated element to good action.

Not only is Rise a lot of fun, it is a fabulous, emotionally engaging and empathetic film. The makers really understand what they are doing with it; a great story in isolation and a brilliant opener to the trilogy. 9/10 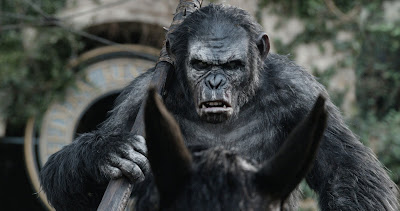 “If you have fever and cough, or a sore throat, stay home” says the announcement near the start of Dawn of the Planet of the Apes. Just saying.

The small viral exponent which metastasized and caused the Rise, has overrun the balance of power enjoyed (and we do enjoy it) by humans. The trilogy is now apocalyptic, as the species versus species conflict evens out in Dawn, and food and commodities are scarce. We’re in the same world that Rise left off but some years on and there are no repeat human characters.

The playing field has very much been levelled. The apes are many, and more advanced than at the end of Rise. There is conflict, though, between and within both camps. There are, of course, characters on both sides who get on and want peace.

Dawn is much more of an action film than the opener, and while that is still a lot of fun the empathy felt dwindles a little. If I didn’t know there was a third film coming, the benefit of hindsight being both brilliant and useless, I’d have a few problems with the middle film. It’s a solid enough experience, but it is the bridge between one and three and suffers a little from what I can only assume was deliberate narrative planning- sharing the same writer and director as the finale but not the first entry in the trilogy.

Dawn exceeds what a film with its premise should do, but “only” hits 7/10. 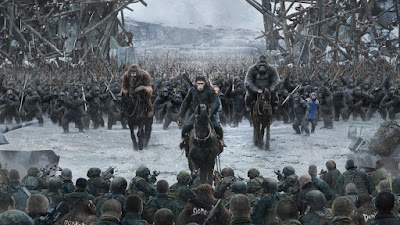 I remembered liking War a lot but not as much as some critics who properly lost their shit over it. Their exuberance may have affected my expectations, though. I hoped.

An uneasy truce exists between the two sides, but this is about to be brutally ripped apart and War sees the series cascade into mayhem and no little tragedy. The humans are overseen by a Kurtz-like character. War outright references Apocalypse Now at one point, but “The Colonel” is one big, mental tribute to a descent into a personal hell, a hell inflicted on the devoted and the victim alike.

War evokes war films based on real life but not in a way that ever feels derivative. It does take itself very seriously in places, but it works. There is an epic journey at the story’s centre, and it is one which slowly journeys towards a pretty harrowing final act. I know that seems a silly thing to say about a Planet of the Apes film, but it honestly does grab you.

I cried in Peter Jackson’s King Kong when Kong died. No, it wasn’t because the Kong and Godzilla Universe I’d hope for died too, it was because my hope for humans did. These Apes films evoke the same emotion in me. The warning that hate breeds hate but with apes as a mirror to this folly we have is what the trilogy really drives home, but by way of entertainment.

A proper epic with a voyage and eccentric characters, but also with conflict and sadness, I couldn’t take my eyes off War. A Sci-Fi film with true presence and total enjoyment. Awesome, entertaining, beautiful yet shocking and with much to care about or hate in the way a good film makes you. A perfect conclusion to the three film story arc.

I struggle to find a reason not to give War for the Planet of the Apes 10/10.

If I were to score any of the Star Wars trilogies as just that, I’m not sure they’d achieve 26/30 as this one has. Is this Planet of the Apes trilogy as good as any Star Wars one? Hey, I’m just asking questions here. Man, that’s going to get me murdered.