Space, the final frontier. Only I'm not really a Trekkie, or a Warsie (?). While I enjoy both the Wars and Trek legacies, I like my Sci Fi slightly different. More violent. For that reason I'm going to exclude them to avoid this list being a bit stale, as the original three Star Wars films would probably make it onto it. Probably. I can't say for sure because I haven't considered them.

I'm not one for rules (if I haven’t made them up myself).

The Thing is my number one in horror, so I'll exclude it because of that. It'd be at least, at least number three here. The Mist is excluded for the same reason.

My usual rule applies that the list can and will change. What kind of nutter has a rigid, unwavering approach to their likes and dislikes? Not this kind. Besides, if my top ten comedy list is anything to go by I'll have a blinding oversight (update: in this case, I managed to fucking miss number three on the list so, you were warned- thanks to Agnes for pointing this out) and be instantly regretful. Rather than just a longer incubating sense of wrong.


There are honourable mentions at the bottom.

I could probably have a David Cronenberg top ten, such is the man's greatness. The Fly is certainly my favourite Sci Fi of his. Dave also has a film in the honourable mentions at the bottom. He insists on me calling him Dave, by the way, says he hates a respected writer and beloved friend sticking to formalities.

Dave, I said. Dave, baby, I just love that flick with that guy from Jurassic Park who somehow remains sexy as all hell in his sixties. That one where he's a mad genius who goes all insect-y but is not in his sixties though gets less sexy as he morphs into a fly. What is that picture called?

The Fly! That's the one, I just love that picture Dave.

Alien is a film so good Ridley Scott has continued chasing it, to the point of overruling a very promising Neil Blompkamp proposal, in order to make Prometheus and Alien Covenant.

It has a very Jaws feel to the hidden horror of this killing machine, which is effective. I have to say, a lot of Alien would be spoiled by seeing Prometheus and Covenant first. It has dated, clearly, but it retains the charm of many older films (particularly horror and Sci Fi) which I am a fan of.

Naturally Bedsit Cinema is fully 3D equipped, yet people seem to yawn and turn their nose at this cinema magic. They’re the reason for all the bad in the world: Trump, Brexit and what have you. Although Trump in 3D would be a challenge, I’d still watch the monstrosity- I love a horror. The Blob 2: Tangoed?

Dredd is pure entertainment, done so well it has repeat charm. If by charm you mean blood, guts, guns and Cersei as a drug baron. 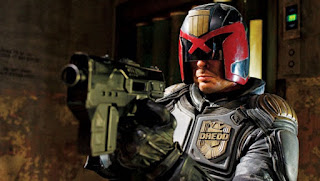 A severed arm. An arm severed by a dinosaur.

I was nine when I saw that dismembered arm, even younger when I saw the decomposing one in Jaws. Is it Spielberg’s fetish? Hey, I’m just asking questions here. There is a strong argument those arms had a lasting affect on me- see Top Ten Horror/ French Horror Special. I won’t bother telling you about Jurassic Park. If you don’t already know about the brilliant Steven Spielberg, early 90’s, effects pioneering, dinosaur action-adventure starring Jeff Goldblum, then who am I to tell you?

Besides, this article is only available on the internet and you clearly live in a cave.

It is a grim and entirely believable world Children of Men portrays, a planet without children, where instead of trying to solve its problems humanity has turned in on itself. The film is so well made, and stands up to repeat views. Plus it has Julianne Moore being all lovely (I have a soft spot) and Michael Caine farting in it.

I love a bleak film and so for me, the more bleak it gets as our little island decimates itself from within, the more Children of Men seems like a film to be seen. That’s an order, by the way.

Paul Verhoeven is a genius. A master of visual effects with a good eye for subtext. Starship Troopers has barely aged in the twenty two years since it was released, due largely to its knowingly kitsch style.

Humanity fights a race of “bugs” across the galaxy, which doesn’t really do the enemy credit- they’re either disgusting, huge, blob-like creatures or terrifying, fast moving predators. The battle scenes are intense, there’s some wonderful humour and also a shower scene.

What more could you want? Starship Troopers is just excellent entertainment.

It is no secret if you read the blog, or have ever spoken to me about film for more than ten minutes, that I LOVE practical effects. If I watch an older film with great practical effects work, I’ll IMDb the director and effects guy and find other films of theirs to add to the watchlist.

Having said that, Terminator 2: Judgement Day is famed for its advances in computerised FX, and rightly so. Arnold Schwarzenegger’s killer robot from the future (and original film) returns, alongside a terrifying new type of liquid metal robot. I’m trying not to spoil the film, but surely you’ve seen T2? Anyway, all hell breaks loose as a nuclear holocaust looms.

The first film doesn’t hold a candle to this James Cameron sequel (though he did direct the original too) and there’s a strong argument he’s made three of the best sequels of all time: this film, Aliens and of course, Piranha 2: The Spawning.

I removed The Mist because it's on the horror list, didn't replace it and failed to notice when I was editing. Sorry! Move along please!

Ok what I'll do, because I'm kind, is move all in the list up one place and install Watchmen at number 10. What I should do, because she requested it and because she pointed out my faux pas (French Ag- fluent now me) is put Equilibrium on the honourable mentions. But I'm not that kind.

Battle of the Sci Fi directors, this top ten. Cronenberg almost had two films included, Ridley Scott, too. Afonso Cuaron might have if Gravity hadn’t been the greatest exhibition of style over substance since John Steinbeck waffled about the weather for seven hundred pages in The Grapes of Wrath. This is Paul Verhoeven’s second film in the top ten.

A cop gets murdered, turned into a badass robot peacekeeper, wrestles with his residual memories as the dodgy corporation which owns him tries to mute them and all bloody hell breaks loose.

I’d buy that for a dollar!

Hooray for number one! Which is James Cameron’s number two! Not that way, you scatty filthbag.

T2 and Aliens in my top three, old Jim Cameron’s not done too badly. Avatar is probably the greatest use of 3D to date, but, y’know, it’s Avatar* His follow up to Ridley Scott’s Alien is a film I cannot get enough of- I even bought the Colonial Marines game just to soak up more of Aliens’ atmosphere and action. Turning the first film’s sparsity of space horror on its head, and making a balls out, but still terrifying film is just pure genius.

They mostly come at night. Mostly.

*(WHY ON EARTH ARE THERE FOUR SEQUELS IN PRODUCTION?!)

Watchmen - Is it Sci Fi, this alternate future superhero comic book adaptation? Adam rules, YES! Another which near missed the top ten. Promoted to number ten due to my incompetence as a writer/ mathematician.

Pitch Black - Fun fact, Vin Diesel owns the rights to this series. The cost? Appearing in The Fast and the Furious. Took one for the team there Vin, hope they gave you a reacharound.

Hardcore Henry – More of an action film, but Hardcore Henry qualifies for Sci-Fi and is also a feast of creativity and achievement on a lower budget. More than highly recommend.

Never Let Me Go – More subtle and nuanced, and also a love story, but much like Children of Men, still a strange for of Sci-Fi, Never Let Me Go might make my Top Ten Romance, were I to write one.

The Dead Zone - A film about foresight which foresaw Trump. Cronenberg’s second on the list.

The Martian - Funny, fun and probably one with longevity. Ridley Scott’s second in the list.

Edge of Tomorrow - Much, much better than its Groundhog Day with Tom Cruise premise suggests. Has mirth, mystery and Emily Blunt.

Fifth Element - If Starship Troopers is kitsch, this mid nineties Luc Besson blockbuster is camper than a Scoutmaster drunk on Babycham.

I Am Legend - Very, very close to making the top ten. The book is better (yes, I am going to be THAT guy).

The Blob 1988 - Prequel to my Donald Trump proposed film above. Cracking practical effects and blood thirstier than you’d expect.

Life - Wildcard. It’s recent, Life, and on Netflix, but I really enjoyed it and it may hold up over time.