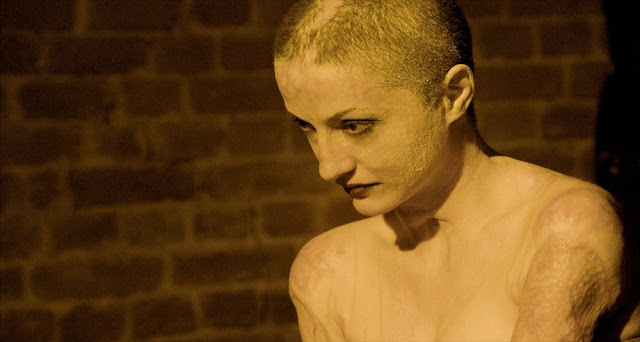 Collective (2019) AKA Collectiv: Unravelling a Scandal

London’s tube network is a modern marvel; a sprawling labyrinth of tunnels running to every corner of the capital, ferrying people to jobs and to shops and to parks and museums. Or at least it is doing that again now after a hiatus, during which it was often only me and a handful of others (which I must say was lovely compared to an overcrowded carriage). The tube, and in particular the Northern Line which I get, is also fucking noisy. Seriously, see for yourself, it tips 100 decibels at numerous points on my daily journey.

Because of this, listening to music or a podcast is nigh on impossible unless I want to further traumatise my eardrums by whacking the volume right up. Apart from read, my next favourite thing to do is put a documentary on with subtitles (I hate subtitles on anything dramatic, because it ruins the, well, it ruins the drama). Documentaries don't need to have the sound right up, and they're basically studying, like attending a lecture on whatever subject it is. That’s why I’m so wisdomous.

The BBC’s Storyville, which showcases a broad range of docs, has long been a go-to of mine. I first saw Blackfish via it. See Blackfish by the way, it’s fantastic though a bit depressing and it’s available on Netflix. Knowing nothing about it, the blurb on Collective: Unravelling a Scandal had me intrigued. Following a fire at Bucharest nightclub Collectiv(e), 27 have perished in the blaze and 180 more are injured. Further die in the aftermath in hospitals, but many of these are people who had survivable burns. The government seems to be lying, and a daily sports newspaper begins investigating, making terrifying discovery after terrifying discovery. 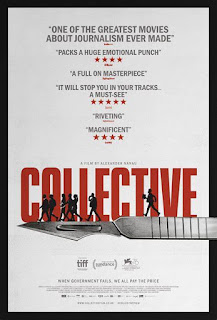 If it wasn’t so provably true, Collective could easily be ignored as the kind of conspiracy theory you’d dismiss as mad. “This goes right to the top of the government, they’re all in on it!” type of nonsense. Only it isn’t nonsense, and it cost people their lives. It’s probably pretty obvious that the film isn’t a feelgood affair, but what it is, is a testament to brilliant journalism and a stark reminder of how important a robust health service is. As each new horror is revealed, I was pulled more and more into the story.

You will be pulled in, too. I forgot my stupid tube worries, the noise and my minor inconveniences.

Collective was the first Romanian film to be nominated for an Academy Award- and it got nominated in two categories in the same year: Best Documentary and Best International Feature Film. It deserves every bit of praise it got, not only is it a great piece of engaging storytelling, it is a brutal expose and, I’m aware this sounds wanky as fuck, it feels important. Even to an Englishman, rattling into early dementia on his way to work (in a hospital), Collective made me pay attention and yes, it moved me.

The best way to watch Collective is piecemeal, being slowly deafened on the Northern Line, staring at your phone and pretending you didn’t see the tramp who just coughed on people for not giving him money. If you can’t have that visceral, immersive experience, then just watch it anywhere, but watch it now. 9/10

Documentary lover? I got you covered. Try these reviews…

JIM & ANDY: THE GREAT BEYOND