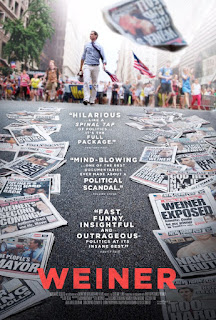 Tagline: The tagline is about four paragraphs of boredom. I'm not repeating it. However I will replace it.

Premise: Documentary about Anthony Weiner. Fiery, fiesty, Democratic congressman. Champion of the people, passionate about politics and dick pic auteur. Actually that's kind, he's worse at taking pics of his genitals than he is at hiding his hobby from the world.

Delivery: The first time I watched Weiner I felt some sympathy for Anthony Weiner Dickpic. The second time I watched Weiner I wondered how I managed that level of human connection. I ashamedly engage with the Republican narrative that he's an awful, shameless, self aggrandising piece of waking narcissism. Here's a fun game, download the PCL and score Weiner as the doc progresses. His being a shithead doesn't mean Weiner is any worse a film, though. In fact, that's precisely where the strength of this documentary lies. Challenging you to make a decision. It's on Netflix currently, by the way.

Weiner is married to Huma Abedein, who you spend the whole film feeling both sorry for and kind of worrying that as a clearly smart woman, she didn't see through this shit. But then she's bad at emails, famously, so maybe she's more naive than she appears. Or maybe she had other things on her mind, I imagine it's all she can do not to lay her husband out. Unfortunately for him, due to his name, Weiner's penchant for penal photography makes great copy in the newspapers, (Fav: Obama beats Weiner). After resigning from congress, due to sending crotch shots in 2011, he embarks on a mission to become NYC mayor. This documentary follows that journey.

The point is made that he's never (as far as we know) actually committed adultery – depending on your definition of adultery- or misused public funds or committed a crime etc. It's a valid point. Think of Weiner as being your next door neighbour, or your binman, or a faceless admin anywhere. He's good at his job, but he likes sending dick pics. None of this is your business, really, when you look at it detached from the specific circumstances. It's classless even from an unmarried man, but does it affect his ability to do his job? Well, ultimately that's your decision as a voter, given his job. As candidate for New York Mayor, the voter has control of Weiner's future.

Weiner is gratefully delicate in showcasing Weiner's willy work, but it is gratuitous in displaying his personality, genital warts and all. He's charming, sure, but it's a facade. He's charmingly unlikeable. Looks like chocolate ice cream but tastes like a guilty wank. The reason I managed to like him at first is, I think, because America and its ridiculous puritanical values annoy me more than one schlong shotting Democrat. This is a documentary where the fucking President pops up saying, “We do not want a pervert in office in New York”. But pussy grabbers in Washington are fine? You hypocritical cunt. I know the White House has a history of sex crime but that tangerine imbecile appearing even for a split second in Weiner undermines any American voters who would say no to one sex pest yet vote another into the presidency. If you care where people put their pees and vees, then it applies to all.

The press ask Tony, “Why should we trust your judgement?” which for me totally misses the point, as a voter it is your judgement. I know the press acts like judge and jury, but it isn't. The doc as a whole is a minefield of values and asking yourself where you would draw the line. For me, the look of silence Huma gives Tony at one point, lets you know that the charade of happiness was
just that. Ultimately Weiner asks a very difficult question, if you agree with someone's political approach, can you forgive their being a monumental arsehole?

Bedsit it? Yes. It's brilliant and challenging, even if watching a man single handedly (arf) ruin his career is what you're doing. He's a cunt. But he's a cunt with your interests at heart. Provided your interests and his are the same... And you like dick pics. 8/10