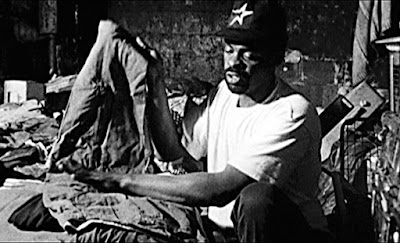 I first watched Dark Days soon after it was available on DVD. My life has not been the same since, and that is not hyperbole. I have never been homeless, I hope to never be homeless, but as a child I used to have nightmares about losing everyone I loved and ending up cuddling the cold cobbles. Dark Days captures a terrifying loss of connection to "society", but injects so much more in to it, too.

Broke and almost homeless, British student Marc Singer decided to tell the story of the people around him living under New York in self constructed structures. So inexperienced at making films, Singer openly admits Dark Days looks how it does  because he was told "If you shoot colour and you don't know what you're doing, you'll fuck it all up and it will come out looking all green or red.". The grainy black and white of the film- almost all shot underground, is striking, perfect, and now iconic.

A shanty town, built in the underground train tunnels of New York. A subterranean city to its occupants, homes many take great pride in. To the City, though, it is a dystopia, a disgusting, fetid sore on their lovely clean NYC. On the image they wish to portray of their city, anyway. Therein lies Dark Days’ drama, as the viewer warms to the oddball, warm and almost all very damaged tunnel dwellers, the council's efforts to remove their homes becomes the fear.

Of course the real reason the authorities clash with these people is because they are ashamed that the dwelling exists at all and while only hinted at the deeper seeded horror is of how close to the bone it all is; we could all be there. We know we should all treat the homeless as we would want to be because frankly they could be us, we could be them. We also all know how admitting that allows us to acknowledge how small the gap really is.

Just a tunnel between your home and theirs.

Bedsit it? Dark Days is not only the best documentary I have ever seen, it is one of the best films I have ever seen. A masterpiece that in its twenty years is still as brilliant (and relevant) as it always was.

I kind of rushed this review out. I wanted it to be perfect because of how much I love the film, but local events made me realise how important Dark Days is and to forgo my vanity. The young homeless lady (Stephania) who sat in Forest Hill station’s underpass everyday- always kind, smiling and helpful, died last week.