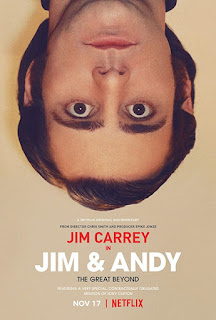 Tagline: None, which is a shame, but the creative team probably used all their energy on the full title of the film, Jim & Andy: The Great Beyond – Featuring a Very Special, Contractually Obliged Mention of Tony Clifton. So, yeah, there's that.

Premise: A documentary ostensibly about Jim Carrey's immersion in the role of real life comedian Andy Kaufman, for the 1999 film Man on the Moon.

Execution: Jim Carrey is a contentious subject in my family. My stepdad maintains Carrey has only ever played one role, a rubber faced goon. While I understand where he's coming from, that doesn't mean that rubber faced goon is never funny, Ace Venture is hilarious, furthermore I'd say he's wrong on at least one film; Man on the Moon. I haven't seen all of Jim Carrey's films, but The Truman Show wasn't all rubber, and while I hated it, Eternal Sunshine wasn't either.

However, Man on the Moon has long stuck with me as my favourite work of Jim Carrey. It is a powerful and funny film about a man who was pigeon holed and forced to be something he didn't feel he was, who liked to play with people's preconceptions and patience, a man who ultimately had life laugh last at his expense. Clearly both a very funny and very difficult man, Andy Kaufman was a pioneer.

The reason I used the word “ostensibly” in the premise for Jim & Andy (I'm abbreviating to Jim & Andy, not J&A:TGB-FAVSCOMOTC), is that this film centres on an interview with Carrey, talking about the job of playing Andy, how he got it and what it meant to him. It is clear Carrey is a huge Kaufman fan, and has been since childhood, Kaufman is to Andy what Tony Hancock is to me, so I identified with the efforts he goes to to recapture Andy's spirit. The cast and crew on Man on the Moon, however, found it a little harder going.

Using previously locked away behind-the-scenes footage, Jim & Andy, is a wonderfully entertaining insight into what it's like to work with someone who's taken the Stanislavski method to its nadir. Basically, a giant pain in the arse. Hilarious to watch, but the exasperation carved into the faces of everybody other than “Andy” (Jim in character) is plain. It's no wonder that Universal Studios archived the footage for twenty years for fear it would kill the public opinion of Carrey, who at the time was a top grossing star/ cash cow.

There has been criticism that Carrey comes across as pretentious, and he does. But no more so than any other actor when talking about their work. Man on the Moon is a brilliant film, however, and he should be proud of his work in it. It's also a film you should see before seeing Jim & Andy, as it provides context. In case you're worried, like my step father, that it's just “Jim Carrey doing Jim Carrey” it's also directed by Milos Foreman, who also helmed One Flew Over The Cuckoo's Nest and Amadeus.

There is a beautiful moment in Jim & Andy where Andy's sister sees Jim in character, and the emotions firing in her core at the sight of him, flicker in her eyes. Jim Carrey was Andy Kaufman for Man on the Moon and for me, this scene is proof.

Bedsit it? It's available on Netflix currently, so you won't have to go far to see it, even if they have just bumped their prices up (*shakes fist*). Clearly this is going to hinge hugely on where you stand on Jim Carrey, but if you're even ambivalent toward him, get Man on the Moon, and watch that alongside Jim & Andy. 8/10
Labels: Andy Kaufman Bedsit Bedsit Cinema Comedy Documentary Drama Film Jim Carey Milos Foreman Movie Rated Review