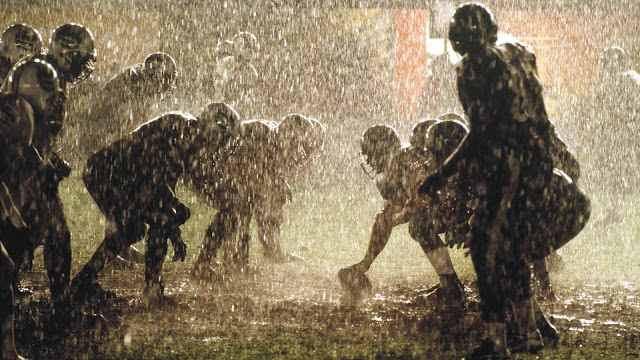 Only a few weeks ago I reviewed an Oliver Stone film with a great cast in JFK, and Any Given Sunday is another one. Super Bowl LV takes place this weekend and while I don’t watch much American Football, I do very much enjoy it when I make the effort to. In particular the Tom Brady versus Patrick Mahomes storyline I’ve very much bought into. If it wasn’t taking place at stupid o’clock here in the UK I’d watch the game live, but as it is I’ll probably try desperately to avoid the result all day Monday and watch it after work.

Any Given Sunday follows the Miami Sharks as they push towards the playoffs. Long term coach Tony (Al Pacino) is plagued by injuries to his players and frayed political loyalties. Owner Christina Pagniacci (Cameron Diaz) inherited the team from her now deceased father and she’s both ambitious yet increasingly open to the idea of selling the franchise- which is what clubs are called in America for some reason.

Obviously in real life Miami are the Miami Dolphins not Sharks and I can’t help but think that the NFL wouldn’t let the film makers use any of the real names or NFL brand due to Any Given Sunday’s content. The film features nudity, drugs, sex, swearing, doping, violence, explicit shitting and the usual egos and acting like spoiled brats you expect of loaded sportspeople. I have it on good authority that the benign football (soccer) film Goal, which started life as a Michael Winterbottom movie, had its access and thus budget withdrawn when the Football Association discovered it was a lot more edgy than they wanted. 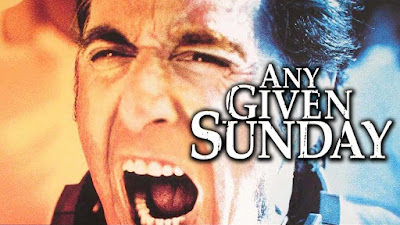 This separation from the authorities is for the best and allows the story to breathe unsanitised. Any Given Sunday is a brutal, bone crunching and thoroughly entertaining film whose two and a half hours whizz by. Ironically, despite there being four, fifteen minute quarters in a game of American Football, The Super Bowl takes about three or four hours to finish. This is what I don’t like about the sport, and what prevents me making more of an effort with it; Any Given Sunday lasts less time than the Super Bowl.

The skill in the game is hard to capture on film, but Stone does a great job of making the matches feel visceral and tense. I know they wear pads and as a lifelong rugby player we always take the piss out of that but there doesn’t seem to be any real definition of what a tackle is, it’s an incredibly painful sport to play, with little margin for error. Given that all Americans are seven foot tall behemoths it’s also like watching heavyweights smash into one another; who doesn’t want to see that and Janet Jackson’s nipple pop out?

Although fictional, one can’t help but think Any Given Sunday is an expose with a lot more fact fed into the back end of its creation than might appear; Oliver Stone is something of an expert at this. An exhilarating sports drama which I was delighted to go back to.

Any sports fan would be mad not to and even if you don’t like American Football- Pacino, Diaz, Dennis Quaid, James Woods, Jamie Foxx, Matthew Modine and Aaron Eckhart should be enough to convince any film fans. 8/10