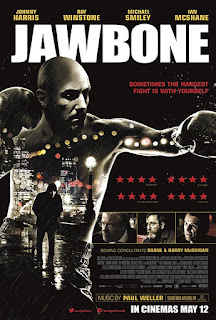 Tagline: “Sometimes the hardest fight is with yourself.” Fitting, for the film and the world over.

Premise: Alcoholic former boxing prodigy Jimmy attempts to get his life back on track by training at his old gym, under his seemingly unsympathetic old trainer.

Delivery: There have been plenty of boxing films throughout the years, some good, quite a few more which were not any good. Does anyone remember the Calcium Kid fondly, for example?

Jawbone shares similarities with a lot of the most well-known pugilistic cinema, and in fact a lot of sports films. Underdog: check. Adversity: check. Climactic fight at the end: check. What Jawbone does differently is approach a lot of the themes much more maturely. There is no certainty that Jimmy McCabe, played by Johnny Harris, who also wrote the film- and rightly nominated for a BAFTA for that work, is going to overcome any of his issues. At the buffet of issues, Jimmy filled his plate, then went back for seconds.

An alcoholic, who opens the film passed out in front of a video of his winning the ABA final at sixteen, McCabe is in a bad way. Grieving for his mother and in danger of losing his flat he turns to his old amateur gym, and coach Bill (Ray Winstone) in particular. Jimmy wants to train, but is warned by this tough love man; no booze-at all, and no “unlicensed” fights.

It is strongly implied that what the film means by unlicensed is underworld or unregulated fights. Not what those in the real-life boxing game would mean by unlicensed, which are insured, above board, and made as safe for the boxers as is possible. Semi pro, or whatever you want to call it. They're a big draw and supply guys to the pro ranks who do well for themselves. Jimmy clearly had a past in the murkier side of boxing. But an opportunity presents itself through an old contact, and out of necessity Jimmy takes it. Ian McShane’s shady character Joe, is not an honest man, that much is obvious immediately.

There is a fight going, Joe explains. But the kid is beating people up for fun, and he's bigger than you. Jimmy is warned at length of the danger of his opponent, then told, “the worst that can happen is that you walk out of there with £2500.” It is categorically not the worst that can happen to Jimmy. He’s past his best, desperate, drying out, and has been warned the man is a wrecking ball. Boxing fans need no reminder lately of what dangers fighters are faced with, or that fighting for money alone is the fast train to disaster.

Here we have our set up. Is Jimmy able to overcome his multitude of issues, not least his strained relationships in the gym with coaches Bill and Eddie (Michael Smiley)? Will he even get to the fight, let alone win it? He’s presented as such an outsider, and the film has a sombre tone, that anything could have happened in the end. This is what was so engrossing about the film. And those who know me, know I like sombre.

While not exactly devoted to sweeping landscapes, Jawbone doesn't need to be, It is brilliantly shot and the boxing scenes are gritty and in parts brutally exciting. The dialogue is believable, leaving enough room for the viewer to think, not pressing points home too much. Only when tough words are needed are they used. Paul Weller’s score is fittingly understated.

Bedsit it? Jawbone is enthralling. While it somewhat resembles Rocky, it’s Rocky spliced with Tyrannosaur (2011- dir. Paddy Considine) as the viewer may or may not like the protagonist, in this case Jimmy, due to his issues. This realism may not be for everyone, particularly many Americans. Jawbone is enthralling, especially as you begin to care for all of the main characters, the amoral Joe aside. As much about the fights faced in life as in the ring, Jawbone isn't just a boxing film, it's a social realist drama with boxing in it. Strongly recommended. 8/10
Labels: BAFTA Bedsit Bedsit Cinema Boxing British Drama Film Film review Ian McShane Jawbone Johnny Harris Movie Reviews Ray Winstone Sport