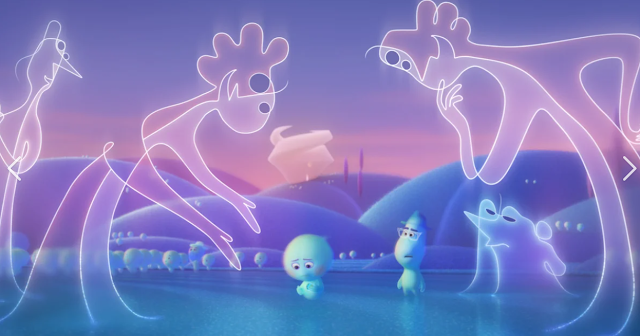 I’ve reviewed a few Pixar pictures before and in particular, absolutely adored Inside Out- which Soul looked very similar to. I had high hopes. Great, giddy heights expected often lead to a disappointing downfall, and married with a certain newspaper who I mention far too often giving Soul five out of five, much like they did the awful Tenet, I was prepared for the worst. I was prepared to be let down.

Soul was a Christmas watch with the family, including my niece and nephew. I tried this two years ago when we watched Get Santa; it proved to be a bit distracting for me, as the children paid the film no attention but yet asked me what was going on while staring at their iPads. They’re five and eight now, all grown up, so I knew I had nothing to worry about.

Yeah right. The eight year old immediately decided to give a running commentary on what was happening in Soul, which had the unfortunate side-effect of making it very hard to follow what was actually happening in Soul. Too much YouTube is to blame, in my opinion. Kids now watch other people watching or playing something (Minecraft or some similarly banal crap) while waffling over the top of it. My niece and nephew aspire to this. It seems to make people rich though, so I believe my sister should nourish this skill in them. At her home. Away from me watching films.

IMDb says in its plot summary of Soul that the main character, Joe, has lost his passion for music, but I read it differently to that. He’s lost his direction and is wayward, somewhat fixated on only one thing- being a session Jazz player. It is what he dreams of. Just as that chance comes, Joe has an accident and ends up in the “Great Beyond”, which is obviously something of a bump in the road for attending his big gig that evening. 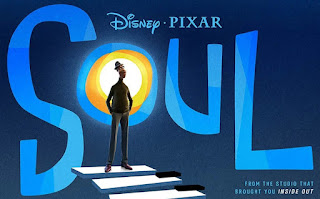 Joe meets a pre-soul, Soul 22, and the two escape this ephemeral no man’s land, traversing the physical and the metaphysical. Messing up the equilibrium between life and death. Soul 22 doesn’t want to be alive (she never has been, she’s waiting to be sent into the world) and can’t find the final happiness, or “spark” in the film, in order to qualify for existing. Soul 22 is where I connected with the film the most.

I don't want to get too heavy here so I'll keep it brief. Having had some fairly overwhelming mental health issues for most of my adult life, which I have written about should you wish to read, this character who is struggling to find an identity or a reason to exist I really identified with. But that’s all I’ll say about that.

Soul is a little harder to follow than other Disney Pixar films, particularly the first half hour or so, and the kids had all but lost interest after this. Not me though, and once the plot picks up pace it really comes into its own. The visual comedy is as funny as one would expect, and I do love how they get animal mannerisms and personalities so perfectly into the animation/ story. In Soul it’s a cat, in Up it was a dog and there were some great little bits at the end of Inside Out too.

The artwork/ animation is also really impressive. Incredibly distinctive and stylish yet still true to the Pixar identity. They mix 2D and 3D animation to great effect and there’s a Picasso-esq vibe to some of its style. This made me smile and think of my Grandad, an artist, who passed away very recently; he had something of a Picasso phase in his later months. That was a nice, albeit subjective, part of Soul.

That is where the film works though. Soul is about what is important, where one finds joy and how someone who can’t find joy might do given the right circumstances. Joy is always subjective, often personal and can be found in the tiniest things. The film acknowledges this. Soul is far more grown up and idiosyncratic than any of Pixar's other work that I have seen and it is all the more rewarding for that.

Moving, beautiful, life affirming and also very funny. Even by Pixar’s very high standards Soul is creative and unique. I’m so pleased to be able to end 2020 with a positive review of a great film. 9/10