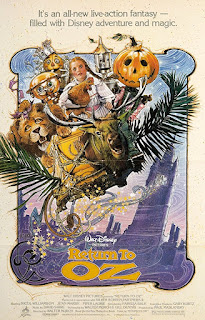 Premise: After being sent to a psychiatric unit, Dorothy returns to Oz with a talking chicken called Belinda. The yellow brick road is decimated, she is spied on by the rocks, hunted among the ruins of The Emerald City's decapitated populace and everything you know about innocence is murdered before your five year old eyes. Between this and Watership Down, you never recover.

Delivery: None of that premise I have fabricated or embellished. If you didn't see Return to Oz as a kid, and you now have children of your own, for God's sake don't watch it with the poor buggers. I'm 34 years old and love horror films, I still found it scary. Just to give you an idea; I have a recurring nightmare that I've had for years and years. As long as I can remember. I won't tell you it because that's boring, but re-watching Return to Oz as an adult, I now know exactly where it comes from. There is a scene which is the genesis of that nightmare. Thirty years of hurt, never stopped me dreaming.

Return to Oz starts with a ten year old girl (Dorothy) being locked in solitary confinement then given a 19th Century ECT. Remember this is a Disney film. They've killed off another little girl by the 20 minute mark, and it only gets darker and weirder from there. I first watched it with my childminder, or more accurately, at my childminder's. She was probably out having a fag while I was being permanently traumatised in the living room. I bet she took the dead eyed, thousand yard stare I returned her as indication that I was lost in the, “adventure and magic” I'd just seen, which is why she kept putting it on. Either that or I was unwittingly part of some amateur child psychosis experiment, like a reverse Clockwork Orange, where she was trying to turn me mad. Well done bitch, it worked.

It's all fine though, I don't murder people, and I never got caught mutilating any animals. Return to Oz is about as trippy and malevolent a film as you could conceive. At all. Not just for a Disney children's film. There are a number of unbelievably mental elements to it. Young, sweet, Dorothy actress Fairuza Balk grew up to play a neo-nazi so convincingly her career never recovered (American History X). See, she was traumatised too. There is a flying, talking-moose-sofa, a clockwork man who speaks like Soren Kierkegaard, “I am not alive, and never will be thank goodness”, a Nome King and a princess who collects heads, to wear.

Return to Oz is a Disney film. For children. Keep repeating it.


Bedsit it? Obviously! It's batshit and scary and hokey and clearly aged, but it's so original. Part of me wishes they still made films like this for kids, another part of me understands why they don't. I urge you to seek this out and watch it. Right, I'm off to have nightmares. 8/10
Labels: Adventure Bedsit Bedsit Cinema Disney Fairuza Balk Family Fantasy Film ratings Film review Horror Kids film Movie Reviews Return to Oz Sequel Weird Wizard of Oz