Since a friend of mine pointed out to me that essentially all movies are about men, I’ve become hyper aware of the fact that she’s right. I’m not saying I disagreed with her at any point, simply that I’m now beating myself up every time I watch a film about men. Usually a film where men beat each other up. In order to alleviate my guilt (Catholic upbringing so it’s hard-wired) I am going to make a concerted effort to review more films about women.

Until of course the guilt wears off*. The guilt usually only lasts a few weeks anyway, said friend will have to find new and more creative ways to gender shame me into a less male-centric review schedule.

Byzantium is a low key film which never got the attention it deserves. It made a loss at the box office which is astonishing when you examine the talent involved in it. A story of two female vampires making their way through contemporary, somewhat seedy, seaside England. Trying to stay off grid is hard when you eat people and a divide begins to appear between the two in their approach to eternal life.

Neil Jordan is a director I love, and one who has proved his ability to fuse fantasy with believability. Even Interview With the Vampire feels plausible to an extent, particularly for a vampire film- although it is much different in tone to Byzantium, there is no camp-Gothic styling in this film. Starring Gemma Arterton, Saoirse Ronan, Sam Riley and Johnny Lee Miller, Byzantium was always going to have to work very hard for me not to enjoy it. 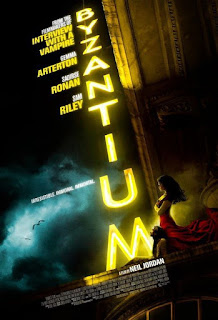 With the neon lights of amusement arcades, gloomy beaches and constant drizzly rain, this could be summertime anywhere along the English coastline. By night the electric plinks and plonks of games machines spilling out into the night create an otherworldly living which is in stark contrast with the bleak windswept shore at day, barely lit by the grey sky above.

Eleanor (Ronan) and Clara (Arterton) are an interesting take on vampires but despite my using that word, from memory I don’t remember them really identifying as such in the film, not least because they can daywalk without bursting into flames and going all crispy. It makes for a nice change from the accepted lore of the undead, and the mystery of who they are and how they came to be is as alluring as it is lascivious.

While there is blood and sex and everything one might hope for in a tale of this kind, there is a nice balance and some new ideas. I won’t spoil the film by bringing them all up for examination, because you should see the film and enjoy them fresh. As said, Byzantium would have had to work hard to let me down and in its own rather wonderful way, it crept into me. Ethereal and yet so grounded, I strongly recommend you see it.

While a wonderful blend of drama and a fantasy (it reminded me a lot of Let Me Go) and although I have very much enjoyed both Byzantium and Blow the Man Down, the two films are very much “sisters doing it for themselves” entries into the female protagonists story structure. I do appreciate they are a tiny biopsy of cinema writ large and who cares when they’re this good. 8/10 - although I am going to make a concerted effort to find a new “type” of XY driven cinema next time.

*and necessity takes hold given that proportionally and in line with my friend’s point, there are more films about men than women.
Check out these related reviews!...
LADY BIRD
I, TONYA
A GIRL WALKS HOME ALONE AT NIGHT
FLORENCE FOSTER JENKINS
PHILOMENA