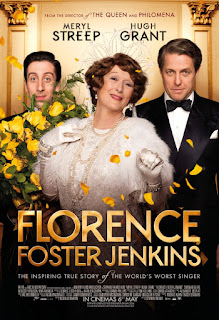 Tagline: “Every voice deserves to be heard.” As the writer of a blog inflicting my own voice on you all, I wholeheartedly endorse this tagline.

Premise: Meryl Streep is wealthy socialite and music lover Florence Foster Jenkins, who despite having the singing voice of a wookie passing kidney stones, uses her money, influence, and the sycophancy of those around her to play a concert at Carnegie Hall.

Execution: Half way through watching Florence Foster Jenkins (FFJ) I paused it and thought, “Why the hell am I watching Florence Foster Jenkins?” Me, the guy who makes his living from boxing, writes zombie fiction and has a penchant for the extreme violence of the Korean and French new wave horror movements? Well, you might say I had a bang on the head. In fact you can exactly say that because I stupidly got myself knocked out playing rugby last Saturday and I directly attribute my purchasing this film the Thursday before to that head injury.

The mystery of Adam's watching films about opera solved (I'm going to rinse this concussion for all it's worth) I may as well tell you what happens in the film about opera. I'm assuming that's why you're here. Truth be told, I wanted to watch a sci-fi film I had, but the subtitles weren't working and I don't speak alien. About ten minutes in to FFJ I almost turned it off. And then it started being funny. Which, although it's not riotous, guffaw laugh funny, it is amusing.

I like Meryl Streep. No, sorry, I LOVE Meryl Streep, and I'm actually quite fond of Hugh Grant, too. Simon Helberg, who plays Jenkins' pianist, does a wonderful job of being the audiences' conduit and conscience as this lavish world of riches and lies unravels itself in front of him. The story is straightforward enough, but what the film really asks is at what point does a little white lie become a monumental whopper, and at when do you draw the line and ruin someone's dream? All the players are culpable, in their own little ways, but some have more honest reasons than others.


Bedsit it? I really enjoyed Florence Foster Jenkins, it entertained me, which is basically the least you can ask of a film. No it's not one I'll rush to watch again but in a way I'm glad I saw it, I read the real Foster Jenkins's Wikipedia afterwards so it must have piqued an interest. Softly amusing and thoughtful cinema. 7/10
Labels: Bedsit Bedsit Cinema Comedy Drama Film Frears Hugh Grant Love story Meryl Streep Rated Review Romance