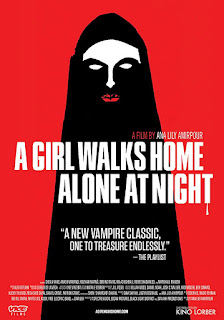 Tagline: “The first Iranian vampire western.” This is a bit too literal for my tastes, and actually something of a spoiler.

Delivery: I love vampire films. When I was talking to a friend about them the other day, my list of decent vamp flicks ran a lot longer than I thought it would. For example; Låt den rätte komma in, better known as Let the Right One In. Yes I know it's obvious I want to show off that I know the original title, even though it is listed on IMDb at the top of the page. Let the Right One In I can credit with with being not only one of the best films I've ever seen, but a genre bending masterpiece which reinvented the vampire film, and got me back into reading. I hadn't read a book in ages before I picked it up, I now read for fun and everything; not just info that I think might stop me dying or going to prison. I've seen both film versions, the play and read all of the author's other books (John Ajvide Lindqvist- Handling the Undead is as brilliant as Let the Right One In).

There's a reason I spent the first, rather long, paragraph of my review of A Girl Walks Home Alone At Night (AGWHAAN- whagwaan blud!) talking about Let the Right One In. A reason I'll get to. Later. To start with what AGWHAAN does well, it is certainly a unique delivery and the film looks great in black and white, even if the sparse budget is evident much of the time. The challenge thrown to Iranian customs/ traditions/ beliefs concerning gender roles and “appropriate” behaviour is a great contextual layer to the story. It really works, and it's something the film makers (Ana Lily Amirpour wrote and directed) should be rightly proud of.

One scene in particular kept me watching when my interest was flagging severely. It was brilliant, and flipped the whole vampire as symbolic of masculinity penetrating women on its head, a stand out moment of genius which sadly, was the best AGWHAAN had to offer. Here come the moans. Selling it as “The first Iranian vampire western” annoyed me as it just gave away all the influences, which would have been more fun spotting from my own knowledge. Apart from one scene AGWHAAN is largely bloodless, it's never an 18, and the horror is severely lacking. As is the western element, it felt to me like they only called it a western to explain the desert setting.

AGWHAAN was shot in California, which explains why it looks so much like the USA. Something totally forgivable given the budget. Not to shit on the ingenuity, creativity or ballsiness of the film and its concept, but it wasn't strong enough for me in either of the areas it sells itself, and it is actually a romantic film, featuring a vampire. Another issue was the sense of myth AGWHAAN attempts to create, it didn't portray that well enough for me, and most damningly it felt a bit derivative, despite the uniqueness of delivery. Suffice to say, if you've seen Let the Right One In, you'll know where this is headed. I'd rather rewatch Let the Right One In...

Bedsit it? There's so much to admire about A Girl Walks Home Alone At Night, but for my tastes it fell flat as a whole. It's one of those films where if you like a twist to a genre, go for it. However, It is better described differently to as advertised so be prepared for that. Ultimately not my cup of tea. 5/10