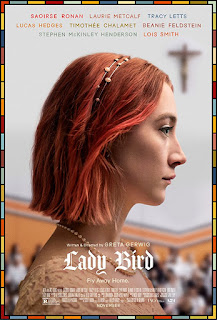 Tagline: “Fly Away Home” Other options for the tagline referencing birds were: As Naked as a Jaybird, A Chicken in Every Pot, A Good Egg, A Partridge Amongst the Pigeons, Arse Over Tit.

Premise: It's 2002, a young Catholic school girl (Saoirse Ronan) insists on being called Lady Bird, wants to pursue drama when she's told she's no aptitude for it, goes through the wringer of first love and attempts to come out the other side and go to college. It's a wonder any of us made it, watching the film.

Delivery: "Just because something looks ugly doesn't mean that it's morally wrong."

Lady Bird was initially a little hard to get on with, admittedly, mainly because most teenagers are hard to get on with most of the time. But once I got over that prejudice, rather a lovely film opened up. Ronan's character Christine Lady Bird, though, is the easiest to engage with. She's intelligent, confused and a little bit angry. Many of the characters are recognisable from that part of our life. Some are lovable, some the opposite, some make you wonder how you ever survived it at all; and thus whether Lady Bird will.

The film is funny the whole way through. Lady Bird is really fair in the way it approaches its characters and even the Catholic church gets a fair shake, which is rare. I am atheist but I was raised Catholic and there are undoubtedly residual issues, but to see priests and nuns portrayed as fully human not just narrative good or bad stock characters was nice. This is because it is so unique, which is sad. The sports coach clergyman drafted in at Lady Bird's school to replace the usual drama teacher was probably my favourite bit of the film. Brilliant.

The writing and direction by Greta Gerwig is excellent, I've not seen any of her other films, but I will make the effort after this. I love Saoirse Ronan, which is pronounced Seer-sha. I checked on the internet and everything. She is excellent, subtle and most of the cast are exceptionally good. However. The pretentious wanker played utterly convincingly by Timothée Chalamet is so totally believable that he stirred up a Joffrey like hatred in me. I had to remind myself that he's a child, fictional and in the telly.

While watching Lady Bird the question came to my mind- who are coming of age films for? Are they for the older, the adults and parents, or a cautionary or hopeful message to youngsters? They could be both, I suppose. Personally I found myself a little envious of the youth of the characters, knowing you can still make bad decisions and they won't ruin your life (unless of course that bad decision is shooting up a school or topping yourself or something). Fence sitting alert: the good ones are for everyone. Lady Bird is a good one.

Bedsit it? Lady Bird has some well constructed characters, a strong theme about family and with that a sweetness and a lightness of touch, particularly in her home life. The way her family talk, react and interact is wonderful and very endearingly real. It is also very funny. 8/10