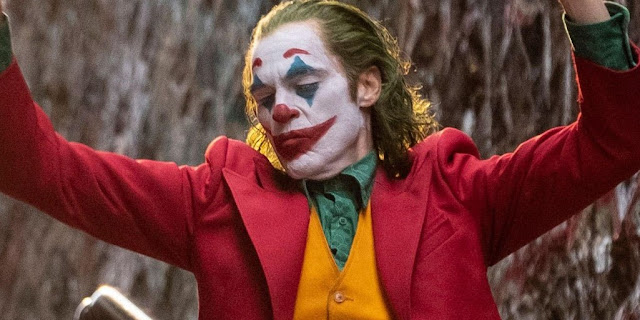 You’ve probably already read a review or two of Joker, given it was hugely popular (and my film of the year in 2019). Or perhaps you have seen it and formed your own opinion. Maybe you’ve seen it and realised that Peter Bradshaw is a pretentious, joyless man who is wrong about Joker and should be locked in a room with Dr. Strangelove on repeat until he cracks and admits it isn’t that good and people only say they like it so others don’t think that they’re thick. And breath.

The plethora of sequels and identi-kit moneymakers which cater to fanboys and garner, in my opinion, unwarranted high IMDb scores has worn me down. I’m clearly not alone as, apart from Peter Bradshaw, reviews for Joker were glowing mainly because it is unique. I wanted to pick out a couple of things from the film which really struck a chord with me and make it stand out, rather than a straightforward review, still spoiler free.

Joaquin Phoenix has been lauded for his portrayal of Arthur Fleck’s journey to Joker, rightly so, and for me it was his body movement which made the performance. The weight loss, which while astonishing and fitting is not what makes Arthur/ Joker work. Phoenix moves the character through juddering, twitchy, awkward and at times confident motions with fluidity. It is spellbinding and as the character jerks one way and another, so do his movements.

Dance is notoriously hard to film, but Todd Phillips manages to imbue Phoenix’s performance with a perfect dichotomy of grace and ugliness. No more so than in a scene where Arthur dances in a disgusting public toilet; his skinny limbs twisting, turning and gliding in the dirt and blood, writhing out of it and the violence he's just committed.

As Arthur acknowledges his transformation in the grubby mirror, the scene reminded me of Swan Lake, which I was once made to sit through all seventeen hours of by an ex. The emergence of one thing from another displayed through a dance. A filthy beauty emerging from beautiful filth, a rhythmical evolution which frankly was way better than Swan Lake.

As Arthur Fleck devolves into Joker, it is no spoiler to say that his mental health (by conventional standards) deteriorates. It is something which has been cross examined in writing and at the water cooler. As a person who has been a patient within the mental health system, here’s what I thought about that issue in the film. Fleck’s troubles are one perspective of an incredibly varied issue. Yes he’s something of an amalgamation of different symptoms, but trust me, knock around a ward an hour before medication time and you’ll see anger, delusions, paranoia and darkness.

It’s not a nice thing to see and it is never the same and never just one thing. But what I loved most about Joker’s take on mental health was how it captured the nihilistic humour shared by those who struggle. Humour on the ward was darker than space at nighttime with your eyes shut. The humor in Joker is much the same and I found it a lovely light in the dark.

“I hope my death makes more cents than my life”, in particular, gets me every time. It’s pure genius and a shame that converting it to Sterling doesn’t stand up as a pun.

I give no weight to complaints that Joker is too serious but don’t then also say it doesn’t treat its subject matter with enough respect. Keep cake or eat cake. Ultimately Joker is a film about how a murderous clown emerged from a mentally ill man. It’s a comic book origins story and there are hundreds of those, there are none like Joker, yet. It was bravely new and so much so it has been aped already (see: The Batman) and has a sequel Joker: Folie à Deux due in 2024 which I'm excited to see if it can match its predecessor for class.

Joker is different from most of the “serious” comic films, in that it doesn’t just have a little more blood or brooding. Joker is seriously dramatic, not fantastic and reliant on the supernatural to wipe away disbelief. Just like Phoenix’s performance, Joker moves erratically, it jerks and then strides; it has tragedy and comedy, severity and splashes of brutal violence. Joker’s brilliance is in its paradoxical approach, which mirrors the journey its protagonist is on. Joker transcends its origins and how many films based on cartoon characters can you say that of?