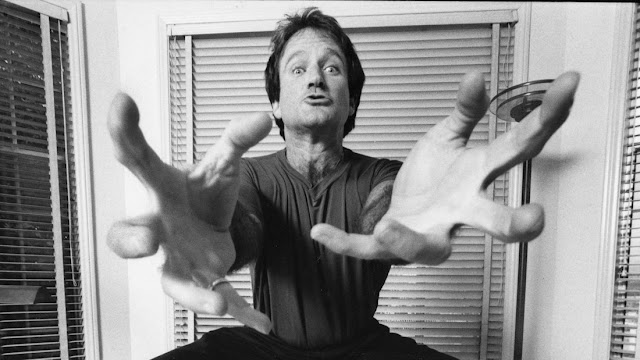 Tagline: “This intimate portrait examines one of the world's most beloved and inventive comedians.” Less a catchy enticement than by the word, dull explanation. Shame, given the film.

Premise: I could reuse the tagline, frankly, but I am not that lazy yet. Robin Williams has gone and we'll never get him back is the premise. If that lacked love, it wasn't meant to.

Delivery: “You're only given a little spark of madness, and if you lose that you're nothing. From me to you, don't ever lose that, because it keeps you alive.”

Answer this for me, if you were as talented, weird and unique as Robin Williams, would you be any different? While I understand his shtick doesn't fly with everyone, came across as showy or attention seeking perhaps; for me it is a logical denouement of who he was. Robin Williams: Come Inside My Mind is a loving, interesting look back at a talent I for one wish we still had the likes of. He may not have been to everyone's taste, but who wants to be to everyone's taste? I have a four letter word for those people (OK five letter plural).

Williams was a unique, enigmatic performer. A man who had a gift I am, actually, rather envious of. I know my dad doesn't read my blog so I can say this safely, but Robin reminds me of my dad. My father's head may pop if he reads that. Now, I am not saying my dad is as funny as Robin Williams (although reviews for Chipstead Players' 2009 Aladdin were positive in the local press) but the exuberance, the dedication to quickfire characters, voices and the utter sillyness: that's my old man. What I saw in the film too, sadly, was me. While Robin had all my father's devotion to and adoration of making people laugh, the depression and seeking solace from your feelings, man I wish talent came with that.

What the doc shows is that Williams was most happiest and relaxed performing, specifically to positive response which is surely only natural. Unless you're Uwe Boll. It is lovely to see someone so at home in their current state, and yet so sobering to realise that's really only a small part of living. He performed to escape his mind; depression, drugs and other things all wreaking havoc on his mood. Williams got older and more idiosyncratic, more settled and more conflicted. His performances got more ambitious and less so.

In World's Greatest Dad Williams was exceptional, see it. In Night at the Museum (1-3) playing a waxwork was so sadly apt, even if he still did it well. When doing what he loved became a task rather than a gift, Williams took a difficult decision. I'm not opposed to that, I believe a person should have the choice over how and when to die. Many people make that choice too soon, some not soon enough. If I were Donald Trump for example I'd have jumped out of the top floor of one of my penis replacement, gaudy idols to a bullshit dream aeons ago. Sadly, I am not Donald Cunt.

Bedsit it? It's a two hour obituary. A funny, interesting one, but one laced with sadness at the loss of Williams, who was only sixty three. Find it and watch it. I'm well aware it is fucking self involved to have talked about me during this. But surely the beauty of films is their resonance within us, and this resonated. 8/10