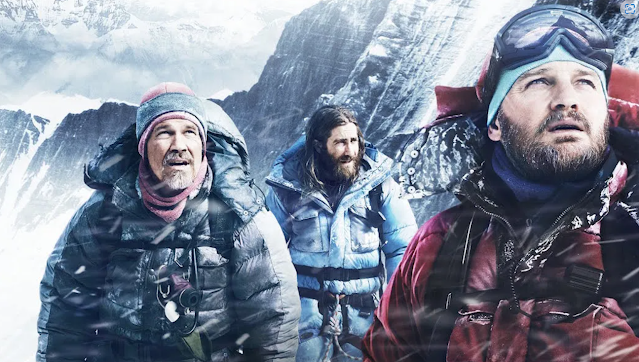 Boasting an ensemble cast, Everest was a film I wanted to rewatch as part of my falling back in love somewhat with the 3D format. No, it isn’t the same as the actual cinema, the Bedsit Cinema, but I have the home technology and in my opinion it still makes a pleasant difference.

Everest tells the true story of a 1996 expedition which went very, very wrong when a sudden, violent storm hit the guided ascent to the highest point on earth and tragically people lost their lives. The film warns of the dangers of turning a highly dangerous, if not deadly, pursuit into a pastime. Climbing perilous rocks, starved of oxygen doesn’t sound like casual fun and in this case it very much wasn’t, but one would hope perfect for a thrilling film with visuals suited to 3D amplification.

If that sounds flippant or insensitive, just remember this is the entertainment industry, not the sombre respectful remembrance trade- that's undertakers.

Director Baltasar Kormákur made The Deep, which looks good but I haven’t seen, and 2 Guns, which looks terrible and having seen it I can confirm that it is in fact, terrible. He’s got a film incoming with Idris Elba about a killer lion which could be a load of old nonsense but obviously I’m going to watch it.

Jason Clarke is far from a favourite of mine, but his excellence at anonymity is actually a boon in Everest, given the breadth of talent involved. There are some smallish roles for big, notably mostly female, actors (Kiera Knightly, Robin Wright Penn, Emily Mortimer) which is really just an observation that such quality names were cast than an accusation any inherent sexism was involved. Enough artistic licence was used, however, that journalist and climber Jon Krakauer was irked by his appearance- specifically that the film’s version of him refuses to go out and help rescue survivors.

Exciting, and of course, tragic, the film really gives you a feel for the environment; the horrendous weather and terrifying terrain. 3D adds to this and brings it to life more than 2D, in my opinion. Snow flicks past your eyes and chasms fall away from you and turn your stomach; it is amazing what the human brain can be tricked into reacting to.

The suddenness of the disaster, the ease with which one can literally or figuratively slip away and the emotions which gather desperate pace are all dealt with well. While moving, Everest retains a degree of wonder and scale that befits the peak itself and keeps the film firmly in the disaster-movie bracket, a piece of entertainment and in a way a lament of how nature can rip into man’s physical limits and life itself- especially when you’re daring it to. For fun.

Everest is, despite the sorrowful subject matter, a marvelous mountain melee which retains both dramatic power and stupendous cinematic wizardry. 3D built on the buzz but even without it, I urge you to watch the film. 8/10
Big, big drama show! Real life excitement in the cinema? Check out these reviews!..