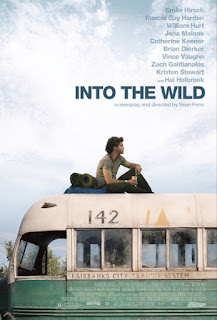 Tagline: “Into the heart, Into the soul” A bit vom-inducing, and makes it sound like a romance film, which it isn't.

Premise: True story of Chris McCandless (Emile Hirsch), an upper middle class student who gives up all his possessions and goes exploring the wild.

Delivery: Into the Wild is one of those films which makes you take a look at your life and re-evaluate your priorities. Who doesn't want to just jack it all in and roam nature? In fact, two of my good friends have sort of done it, cześć przyjaciele! We're lucky in being one of the last generations who'll be able to enjoy nature, which makes it more special I suppose, if you're a glass half full person, which I'm not. We're all doomed!

Christopher McCandless rejects his chosen (for him) lifestyle, initially portrayed in the film as something of a eureka moment when his parents insist they buy him a new car. Chris doesn't want a new car, the one he has is fine. This causes friction and eventually he vanishes. The film follows him on his travels with voice-overs, flashbacks and occasionally cutting back to his family, unaware where or how he is. We the viewer know that mainly he's having some pretty scenic adventures and all seems, excusing the apparently selfish nature of abandoning one's family without word, rather idyllic.

Sean Penn directs Into the Wild, and does it wonderfully. Penn brings a very literary feel to the film, prosaic and with real depth. It clearly draws from the influences the real life Christopher had in his books, they were his companions, his sister narrates at one point. That narration really drives the emotive side of the film, and Emile Hirsch is wonderfully empathetic in the role. As the journey rumbles on, the context of Christopher's absence becomes more evident and less straightforward, adding a sadness, which only grows as the the time slips away.

“Some people feel like they don't deserve love, they walk away quietly into empty spaces, trying to close the gaps on the past”

Into the Wild is two and a half hours long, but doesn't feel it. So grand in its scope, with so many new and interesting characters, beautiful vistas and at the heart of it the mystery of why this young man chose such a drastic form of escape from modern life. As something of a hermit myself, it appealed at first. His escapism is so romantic, so tempting a dream, but reality and dreams differ for very good reason.

Bedsit it? There is so much beauty and wonder in Into the Wild, but on my second viewing, almost ten years on, what I noticed was the underbelly of sadness and secrets. The real driving force, or motivation if you're an actor, of Christopher's actions. It was still an awe inspiring film. 9/10