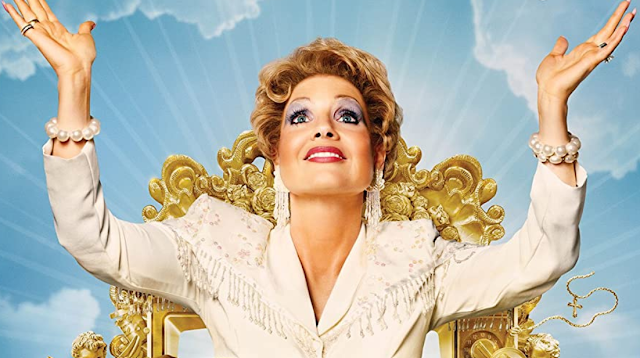 Jon Ronson has a BBC podcast series, Things Fell Apart, which I highly recommend. In Things Fell Apart, Ronson chronicles the “culture wars” through the lens of related human stories. One of these episodes/ stories features Tammy Faye, who I think I’d seen and heard of before (she was a unique personality) but knew nothing about. She came across rather wonderfully in this podcast and so The Eyes of Tammy Faye appealed.

Tammy and Jim are sickeningly sweet as a couple, until they’re not and fame and money and all that temptation stuff that Jesus warns about become an issue. Or several issues. Jesus didn’t wear fur coats, though of course there’s very little need for them in Jerusalem, and he got very pissy about money lenders in the temple. They were only lending money! The payday loans of their day, practically altruistic benevolence compared to the sheer cynical robbery of televangelism. Not only is asking for money via TV for God unchristian, it’s immoral full stop.

Tammy and Jim cut a wave in televangelism, a huge faith movement cash cow in the USA. 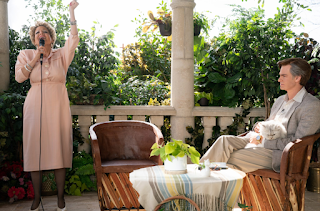 While the film skips through their admittedly interesting and dramatic existence at the centre of the burgeoning Christian TV scene, what keeps the film interesting as a spectacle is Tammy Faye. She seemed like such a wonderful, loving person and a perfect example of Christian; something I think the often ultra right wing Evangelists have misunderstood. At least that was my impression of Tammy before the film, because while her heart was mostly in the right place she still made mistakes and could be selfish.

But then everybody does that, it’s just that it’s an issue when people (and you) are profiting from the idea of your virtue. Tammy’s infectious positivity, contrasts her struggle to be what she wants to be and what others are invested in. Existing in an annoying world where Hah-lelujah is used as punctuation, while sinister forces lurk cynically behind the projected religion, The Eyes of Tammy depicts a dichotomy that is watchable and interesting but doesn’t hit home anything harder than that people will lie to make money.

One rendition of Glory, Glory Hallelujah is very rousing indeed, but I wouldn’t pay for it. Just an observation.

A straightforward and mostly light-hearted look at Tammy’s life, told with sympathy and in its best moments some wonder but never with the power to convert. She was clearly a force of nature, a person unafraid to confront their faith with their reality. As for those around her, though... 6/10

Ah religion, it's like opium, or something. Check these review out!...
APOSTASY
DEAD MAN WALKING
THE DEVIL ALL THE TIME
I AM NOT A WITCH
SAINT MAUD
THE MIST
Labels: Adam Thorn Andrew Garfield Biography Christianity Disney Drama Evangelism Jessica Chastain Religion Television The Eyes of Tammy Faye