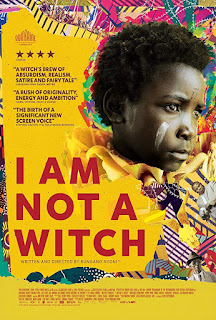 Tagline: A funny, provocative and enchanting African tale. On IMDb African was spelt Agrican. I'm assuming that's a typo, isn't it? Is Agrican a word?

Premise: A nine year old Zambian girl is accused of witchcraft by her village, and is taken into a witches commune by an opportunistic government minister looking to make some money from her.

Delivery: “To show you how much your government cares about you, we have bought you a new truck! And not just any truck... An orange truck!”

I'll start by letting you in on a secret: I'm completely uneducated when it comes to African witch culture. Don't have a scooby. I had no idea whether I Am Not A Witch was complete fiction or based on reality in a small way (the film is dreamlike and ephemeral in style). Being the diligent film blogger I am, I checked, and there are witch communes in Africa. Also, director Rungano Nyoni who is Zambian/ Welsh went and researched them for the film.

The young girl sent to witch camp- essentially a shit Hogwarts but with toothless old crones instead of irritating pubescents- barely speaks for the film. She is given the choice, having been cast out by her village, of accepting she is a witch and joining the older women as part of the sort of semi slave labour, semi circus act life, or denying she is magic and becoming a goat. Apparently it never crosses her or any of the other "witches" minds that the goat threat might be bullshit.

I Am Not a Witch is both an easy watch and a challenging one. On one hand it is an absurd, very funny in places drama about religion,  what people will believe and how others will exploit those beliefs. On the other hand it is an obscure fairytale, an opaque lamentation of humanity's polar propensity for innocence and exploitation. This is a film which will make you think. You might not like it, I certainly don't always want to watch a film where I have to Google things afterwards, but I enjoyed it with this one. It has some hilarious moments, and some very sad ones. Ultimately it left me feeling a bit sorry for humans. Exploit or be exploited.

The witches to an extent, and certainly Shula- as they name their nine year old new member, are the subjugated and naïve. Mr Banda, however, could not be more of a leech. Essentially an African Chabuddy G, overweight, sweaty and lying out his arse; cheating people to make a quick buck, he's a horrible man. If the film were played out as a straight comedy then it might be easier to like him, or at least feel some sympathy. However, despite not liking him, his pathetic floundering does provide some of the best moments of the film.

Bedsit it? Ultimately, a funny, poignant, eccentric fable about the power of belief and disempowerment of women. How much truth there is in I Am Not A Witch I do not know, but it feels like it is telling a truth, even if it is a parable. 7/10
Labels: Adam Thorn Africa Bedsit Cinema Comedy Drama Film blog Film review Fuck Black Panther I Am Not A Witch Movie Review Rungano Nyoni Satire Zambia