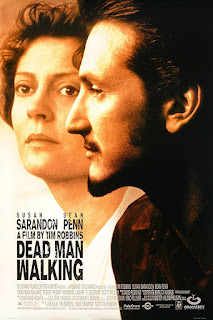 Premise: A man on death row (Sean Penn) convicted for his part in an horrific crime, is befriended by a nun (Susan Sarandon). As his execution date nears, limits of love, truth and forgiveness are tested.

Delivery: It's exactly films like Dead Man Walking which are the reason I stopped calling this section “Execution”. Sometimes even I can't make jokes. I realise there is also an empirical case that I never have. I could run amok with flippancy and hatred in this review, but I won't. Just know that I want to, I want to take the easy way out.

This is probably weird, but Dead Man Walking is from memory the first film which made me cry. Had a little Friday night in on my own; few beers, made a chilli, y'know, standard lad night minus any mates. Setting the standard for my later life, really, given this was almost 15 years ago... Anyway I put Dead Man Walking on, thinking I'd get bored and switch it for CandyMan or something, but no. It is absolutely gripping dramatically, emotionally and morally. I'll give you a rather long quote to set the tone.

“We anaesthetise him with shot number one; then we give him shot number two, and that implodes his lungs, and shot number three stops... his heart. We put 'em to death just like an old horse. His face just, goes to sleep, while, inside, his organs are going through Armageddon. The muscles of his face would twist, and contort, and pull, but you see, shot number one relaxes all those muscles so we don't have to see any horror show... We don't have to taste the blood of revenge on our lips, while this, human being's organs writhe, and twist, and contort... We just sit there, quietly. Nod our heads, and say: 'Justice has been done.'”

The dichotomy of the words in that quote, the confusion between the clinical and the crass, the pious and the guilty, really captures the mess of feeling in Dead Man Walking. It probably won't come as a surprise to find that I got both angry and upset watching it. The characters (based on real life people) are so well drawn, deep and complex, it is testament to the quality of acting and film making (Tim Robbins directed) that the humanity shines through; particularly of Penn's character Matthew Poncelet. Not only is he guilty of a terrible crime, he's instantly racist and repulsive. Assuming you aren't a racist that is. I imagine racists don't really find being a racist an issue in the personality stakes.

Forgiveness is harder than anger, and Sister Prejean attempts to give a practical demonstration of this through her time with Poncelet. Or does she? Is she just trying to convert him, to cure him, to absolve herself of something? For Matthew's part, it's surely obvious he's using her, for company, legal assistance and perhaps some sexual want. There's a lot of values being challenged, both the character's and yours, it isn't fun at times. Nobody likes having their values or imperfect ideals examined unless they are so smugly resolute that they think they know everything, which confirms they don't.

The whole of the film seems to revolve around your reading of the Bible. Not yours, the characters within Dead Man Walking. I know many of my friends are quite literally experts on this so I'm chewing the wrong chord, and in line for a slap, so I'll leave it there. But as the sword of Damocles looms ever larger over Matthew's neck, the viewer is dragged closer in to the debate; about death, the right to kill, friendship, love, religion, redemption and mainly, what it is to forgive. In the end, it all comes back to that one word: Justice.


Bedsit it? It's not an easy watch, Dead Man Walking, but I imagine you'll be able to tell I rather like it. Even when you add 15 years, all of the layers to my life, the growing up, all of the reasoning I did watching it, it's still moving; and it made me cry again. 10/10