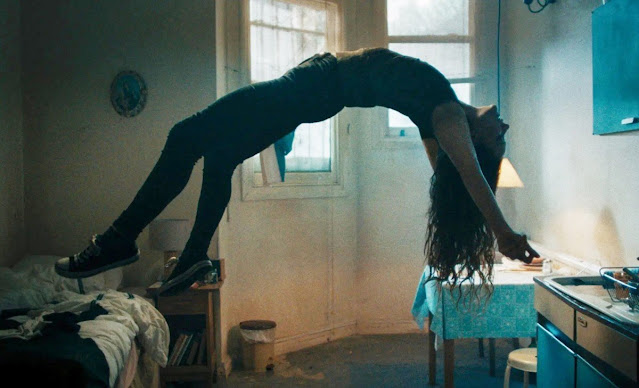 Although Saint Maud was made (and sort of released- at festivals) in 2019, it is a recent release in terms of its availability. Critically acclaimed and at only eighty four minutes it is short, but is it as sharp as the reviews made out? Time spent on the shelf can be bad omen, and there's not a lot of wiggle room for a meandering plot there. Actually, deciding to go along with the reviews and the promise of some clever new horror, its brevity appealed to me.

Maud is a nurse who starts a new job caring for terminally ill, formerly famous dancer, Amanda. Maud is, it is fair to say, a big fan of God. The nurse sees herself as more than just a carer for her ward, she is also her spiritual saviour. Amanda is less keen on the latter role. Saint Maud’s central pair of Morfydd Clark (Maud) and Jennifer Ehle (Amanda) have a wonderful chemistry, where unrequited devotion meets unrequited spite and an unholy relationship is conceived.

Director Rose Glass (and team) set the scene and tone of Saint Maud pretty quickly which I liked, and it is well acted and atmospheric. In this seaside town neon clashes with night. Fake light fights pure dark. This conflict exists in Maud, too, and her mental state is seriously in question. Her fervour stems from something traumatic, it seems. The argument could be that it is a mental health issue, as Maud’s mind tries to mend her present and her past. 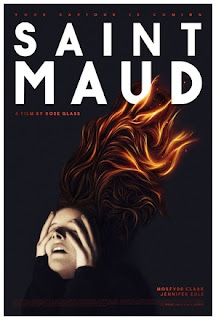 As someone who was raised Catholic, attended every level of Catholic education and even worked for the church (in IT, and no it wasn’t all clearing priests’ browsing history), I’ve met a lot of the newly converted and there’s often something of a tell to their newfound faith*. Overly zealous, pious and lacking an understanding of anything other than black or white (neon or night) are common traits; Maud stinks of this from the off.

Oh, and just for good measure she has an eye watering obsession with penance and guilt. Which is also pretty Catholic.

Saint Maud is not a turn-the-lights-on horror film, but I don’t think it is meant to be. It is a horror more in tone than content. Maud’s loneliness, search for meaning and desire to escape from what plague her consume her and as they do, the film spirals downwards. It is easy to judge Maud, easy but wrong I think. How does one, or do you, interpret God? How then do you apply that interpretation to the physical world? Who knows, Maud might be right.

If this all seems like I’m in several minds over how I feel about the character of Maud, and the film, that’s because I am. I take having a film still making me think well after I’ve watched it as a good sign. Not from God, not that kind of a sign. I am still chewing Saint Maud over.

I had to sit on my score for Saint Maud a few days, to let it settle properly. The film deserves attention, it is fresh and it inspires some odd emotions, contrast and blurred lines in a world of extremes. 8/10

*Not all newly converted, I must stress, but reformed Catholics usually have a lot of shit they're over compensating for.

Want more God in you? Worship at the alter of cinema!...