Let me preface this by saying, what do you expect here? Anyone who has even clicked on the link to read this review already, however subliminally, knows what Jackass Forever is going to be. If you weren’t a fan of Jackass before, trust me, I am not going to change your mind with my following words and I won’t pretend for a second that I aim to. Keep reading, though.

Johnny Knoxville and his ageing troupe of masochists tool up for another big screen effort to die for their “art”. In places they almost succeed! When Knoxville was lying motionless in the mud after a bull had flipped him into the air like a coin from a thumb, and gravity had done its insentient intentions by pulling him into terra firma with terrifying force, I did wonder whether, if he had died, they’d still put it in the film. Probably, was the conclusion I drew, but I know he hadn't expired as he did the media tour selling the film, which kinda ruined the suspense. 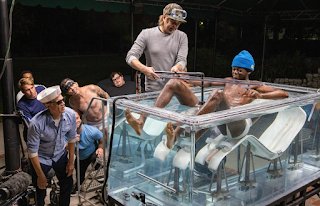 There are new members to Jackass’s cast of imbeciles, and as a fan, I have to admit I still very much enjoyed their unadult(erated), infantile joy at competing for The Darwin Award. There’s plenty of male nudity, specifically a male genital mutilation that borders on perverse- some of these guys just need to have a vasectomy if they’re so hellbent on infertility. The stunts set up are silly and reckless and in parts had me laughing so hard I could barely breathe.

I crticised my ten year old nephew’s YouTube “programming”, claiming that it must make you stupider simply by being its audience. That is categorically a scientific fact that I will not back down from. However, as I watched Chris Pontius doing his best Buffalo Bill, tucked penis, dance in night-vision in the corner of a pitch black room full of men falling over and injuring themselves, a part of my brain happily accepted that Jackass Forever is part of the idiocy issue. No disclaimer can undo the dumb, but what fun.