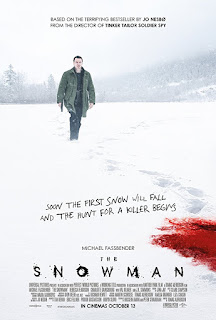 Tagline: “Soon the first snow will fall, and the hunt for a killer begins.” Zzzzz... Also it's snowy from the first shot to the last.

Premise: Murder mystery set in Norway. Not that you'd know from watching the film.

Delivery: I've been on a good run of luck with the films I've seen lately, I haven't seen one I've hated since, ooh, last Tuesday. The Snowman is a snow bound serial killer thriller, my kind of crap, from the director of Let the Right One In, one of my favourite films ever. Hopes were high, but they didn't stay there long. The film begins with a short segment which I'll surmise as, “how to create a screen psychopath in five minutes if you really can't be arsed” and doesn't get any better.

Being such a huge Bedsit Cinema fan, you'll no doubt remember how in love with Jo Nesbo I was after watching Headhunters. A writer with such a paucity of creativity he couldn't think up a better name for his Norwegian protagonist than Roger Brown. Well, the makers of The Snowman clearly thought their film would be even more convincingly Scandinavian if they had all the Norwegian characters speak in non regional dialect English. Like they're all BBC News presenters from 1988. That'll really create the atmosphere needed for this already frankly implausible and in places laughably silly murder mystery thriller.

The Snowman sees Nesbo again fail miserably at character names, they're every bit as ludicrous as Roger Brown. I reckon he picks them out of a hat. A hat full of English names. I had a look through the credits to further make my point; Harry Hole, Flip Becker, Bar Guest, Hockey Spectator... now I'm not Norwegian, but does anyone know if these are remotely believable native names? If I was Norwegian I'd be in two minds as to whether I was annoyed the film-makers basically erased Norway from the film, because on one hand the length they went to to remove it from on screen writing, police cars, and have it all in English with British accents is fucking offensive. But on the other hand I'd be trying to distance myself from Jo Nesbo at every turn.

Back to the plot and dramatic presentation thereof. Bluntly: it's all terrible. A big mess, badly acted and with zero tension. The only reason I watched to the end was because I'd had a guess at who the killer was and wanted to see if I was right. I was, and I'm never right about these things. There's almost nothing original about the film, it's horrendous, and how did nobody in the production team spot that snowmen aren't scary?! I mean maybe they are a bit at first, like clowns or your neighbour's erection, but after a while you get used to them and they lose their edge.

Final gripe; what's happened to Val Kilmer? He looks like a rogue Spitting Image puppet which has locked the real Val away and started taking his roles. He acts as well as one, too. What have you done with the real Val, you monster!


Bedsit it? Be it on your head, but don't say I didn't warn you. Even as a genre I like and the kind of thing I can sit through even when bad, all that kept me going through The Snowman was knowing it was so bad I'd have pages of ammunition to hurl at it- coating it off. I hope Fassbender got well paid, because this will hurt his reputation, the Val Kilmer puppet's- less so. 3/10
Labels: Bedsit Bedsit Cinema Charlotte Gainsbourg Drama Film ratings Film review Michael Fassbender Movie Reviews Murder Mystery Norway Snow The Snowman Thriller Tomas Alfredson Val Kilmer Whodunnit