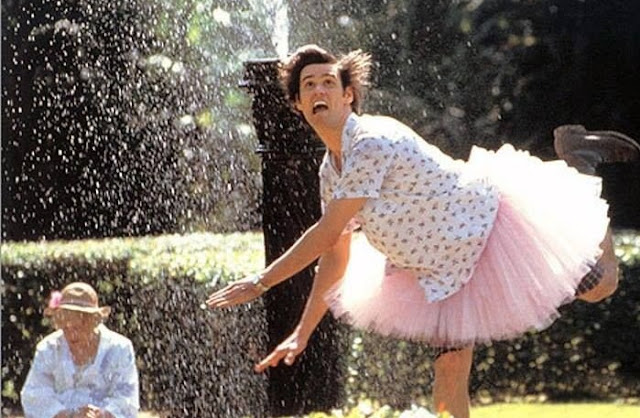 My first serious girlfriend could quote along with Ace Ventura- it was rather endearing. She was a lot of fun except for when she wasn’t, but I’m self aware enough to know that I’m not a lot of fun except for when I am. Ah relationships, they’re all fickle and largely pointless. Except for animals. Animals are either brilliant, like almost every dog, or fucking annoying, like almost every cat. Any other pet apart from fish is weird and even fish are more an ornament than any kind of company.

If you own a mini pig, kill and eat it, then kill yourself. God will punish you. Except that God doesn’t exist. God’s a kind of imaginary pet who thinks he’s better than you, judging you- like a cat only he doesn’t need feeding. Imaginary cats are better than real cats. Fact.

Right, now that I’ve lost 90% of readers, let’s talk about Jim Carrey’s goofy, wisecracking and unhinged Pet Detective! Ace Ventura is a rogue, a weirdo and a man who lands a gig trying to find the Miami Dolphins', dolphin. The mascot has been abducted, and Ace isn't exactly popular with the local PD. All manner of silliness ensues as his odd techniques to crime solving lead him down some strange paths. 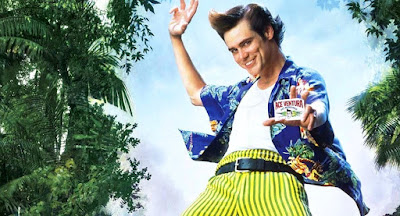 Having not seen Ace Ventura for some years, I wasn’t sure whether I’d get on with a film I recalled as being puerile and not as funny as watching my ex reenact it live. As amusing as she was, Jim Carrey is better. Plus we’re not going out anymore and I can say that now without an argument. Yes the film is stupendously stupid, unapologetically silly and you have to let go of any kind of common sense- but isn’t that the point of most comedy (except for Todd Solondz films)? Just letting go can be fun.

Jim Carrey’s physical acting is unrivalled. The only other actors I can think of in his career are Robin Williams, Sacha Baron Cohen and perhaps Adam Sandler. Good actors anyway, Lee Evans doesn’t count because he isn’t funny. Ace Ventura: Pet Detective is pure, quite literally unadulterated ridiculousness.

Eat your mini pig first, then laugh and laugh until you snuffle yourself out.

JIM & ANDY: THE GREAT BEYOND

LAND OF THE LOST