The poster (see below) for Bottoms Up tries to titilise. Bottoms Up is not sexy even for the Sixties, let's get that out the way. It is explicitly about boarding schoolboys, fed up of being batted on the backside with a cane (although each to their own) and rebelling. Women barely feature. I saw the film once as a child and had not seen it since despite fond memories of laughing like a loon with my Dad. There’s an element of, hold on...

I’ve just seen another fucking moth. We’ve got the ones which don’t just piss you off by flapping like fucktards at a bulb, these eat anything nice you have. I’d happily wring every single moth’s neck, though, they’re all annoying bastards. Especially the insidious little cloth-eating cocksuckers. There is an ecological argument to keeping the suit-chewing-fuckers alive, I know, but the earth saving horse has bolted guys, and I don’t have kids. #KillAllTheMoths

I think I killed it, anyway. I’ve even relaxed my treatise with spiders in the house (they die inside, outside I’ll admire their skill) because I’m hoping a mutual enemy makes us both friends. How much the spiders understood of this discourse I am yet to know. Moths are no fun to eat for humans, if you can catch the flappy, dusty little sneaks. Spiders probably like to eat them more than me.

Saying that, at secondary school a classmate shouted at me in the changing rooms and when I turned showed me his erection. He then called me gay. I was ridiculed in front of and by the class and felt humiliated. Until much later when I realised he was the one hard in a room full of flaccid teenagers; the teacher aside (but that was normal). I wasn’t able to express that observation at the time, because I was a child and I was scared. What I was able to do was hit him in rugby days later so forcefully he couldn’t play his beloved football at the weekend*.

How’s that for hard, prick? 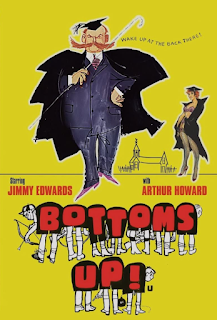 The best way to deal with moths is apparently that you can’t really ever get rid of them but, like bullies, you can hurt the ones who get at you. And bullies have teeth to knock out.

In Bottoms Up the bullies are supposed to be the teachers; these days the cool kids would call them old wankers, except for that one, he seems alright. Jimmy Edwards plays the beleaguered Professor Jim Edwards, Head-Master of a posh boarding school in a scaling up of an apparently popular radio show from the time. He's sort of the one who seems alright, but he does still beat the pupils. The film is a screen outing for a popular radio show, and when you see a twenty something playing a schoolboy in his early teens, you'll realise where it might have worked better over the wireless.

Stephen Fry based the brilliant General Melchett on the Professor, I am so certain of this I won’t bet on it because gambling only wins for the house. I am not the house.

I take the piss, but there is a lot of funny in Bottoms Up- mainly perfect slapstick and characters which balance the film. But it has aged, humour isn’t completely the same now, there’s blacking up in it for example, but just, perhaps, try to look at blackface with a cringe which understands but doesn’t accept it. Hopefully we’ve evolved enough to accept things were different- even if they were wrong- rather than rewrite history.

There is no way this film would get made today and in a way I love that about Bottoms Up. This is, quite literally, old school comedy.

Cultural ageing means naught to me, we don’t make things for the future and if the future likes you then great but usually you’re dead by then. Or Google has deleted you and you may as well be. Despite my ability to throw issues aside and try to reconnect with the laughs I had with my Dad, Bottoms Up tired after a good start. 5/10
*Much, much later I'd have been grown up enough to say yes, so what if I am gay.