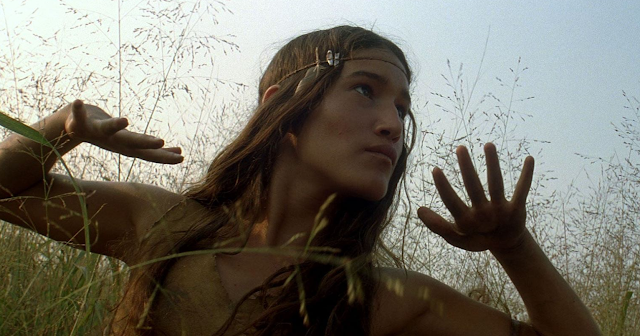 Based on the story of the first permanent English settlement in America, Jamestown in Virginia, and Captain John Smith’s experience with the Powhatan tribe (where he meets Pocahontas), The New World is writer/ director Terence Malick’s take on colonial culture clashes and humanity’s relationship with nature and itself. Starring Colin Farrell as Smith and Q'orianka Kilcher as Rebecca (never called Pocahontas in the film), a deep cast is bolstered by Christopher Plummer, Christian Bale, Wes Studi, David Thewlis, Ben Mendelsohn and even Eddie Marsan.

Terence Malick is something of a stylist, to put it mildly. Some love him and he infuriates others- and that isn’t just viewers. After filming The New World, Christopher Plummer vowed never to work with him again, calling him boring and saying he overwrites things. It certainly sounds like Malick is eccentric, but, the other anecdote about Christopher Plummer’s experience making The New World is that he was livid his part was cut down in the edit and a monologue of his not used fully. Read into that what you will.

Some brief acting observations- Colin Farrell’s accent is uneven, which is mildly distracting although he’s mostly good. The central character, Pocahontas, who holds the timeline and story together is key, and then fourteen year old debutante Q'orianka Kilcher is exceptional in the role. She is at once a child and an adult, both sensible and able to get lost in all the new emotions and conflict within and around her. The other cast members float by, mostly, in keeping with the film’s entire essence.

The natural inhabitants are referred to as “savages” by the newcomers, but it’s the settlers who immediately trample and trash the environment. Destroying to build, living on, not in the land; there is stark contrast between their grim, lifeless abode and the indigenous tribe, who blend with their home both literally and figuratively. 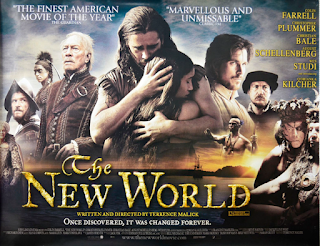 Malick’s The Thin Red Line is one of the finest war films ever made, in my humble opinion, and it shares many of the themes and a similar approach to The New World. However, while both are ephemeral and contemplative, The New World really basks in that- shots of nature, trees, water, birds and sky are beautiful and overbearing, and poetic narration overlays this artistic imagery. Stylistically languid, dreamy, slow and mildly disorientating, with a simmering danger in the contrast of cultures.

The New World is a linear story but it feels non-linear. It flows yet is disjointed. This is in part due to Malick’s editing preferences, with abrupt cuts and a tendency to meander from dialogue to monologue or even just atmospheric shots. Eventually you’ll drown in it all, peacefully or not; it is a cinematic opioid, which doesn’t so much tell you a story as wander past one, dipping in and out of its presence. You’re either on board with this approach or you aren’t and with its run time of over two hours, or just shy of three in the extended edition I watched, I accept this is divisive.

There is a romantic element which drives the story- one which really happened (though how accurate it is would be for someone other than me to tell you) and obvious conflict, but no melodrama. It’s almost hard to put a label on quite what The New World is; it is everything and something else. It just is. It might help thinking of The New World, certainly the longer edit, as less of a traditional film and more of an arty experience. I found it all quietly moving

In places I got completely, wonderfully lost in it, allowing it to wash over me with its grace and gentle thoughtfulness. In others I wanted more from it but I don’t think Malick is a filmmaker who cares about pandering, he does his thing and there you go.

Although not the highest score  if you haven’t seen it I would strongly recommend putting aside the time and trying The New World. 7/10