Page to Screen: Let the Right One In 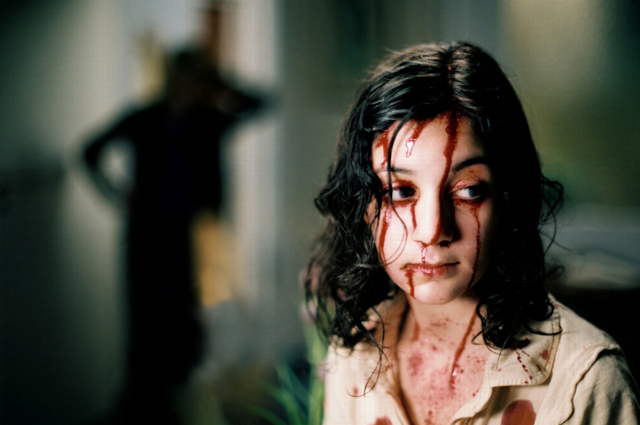 Page to Screen: Let the Right One In
Horror/ Drama/ Thriller
Spoiler free

Page to Screen is a series taking a look at the journey of a piece of writing (be it novel, non fiction, play etc.) to its on screen, and other manifestations. You'll often hear people lament that a film or series didn't live up to the book, but it's an unfair comparison. There's too much detail even in a relatively short novel to keep it all in a motion picture. Plus, why would you want to? They have very different purposes and thus experiences.

With that in mind, Page to Screen will look at the content and structure of a book and examine its trajectory and presentation as a screen, radio or stage production. Sometimes, as with Let the Right One In, as several incarnations.

Let the Right One In was released in Sweden in 2004. Written by John Ajvide Linqvist, the vampire story's relatable yet unique themes, setting and approach made it a worldwide hit. Since made into a Swedish language film with an English remake, and a stage production; this is the legacy of Let the Right One In.

"If a child was a vampire, having to kill other people and drink the blood in order to survive, what would existence be for this child? It would just be a lonely, loathsome, terrible existence"

A background as a magician, then stand up comedian, is an unusual way to come to being a successful horror author. However, John Ajvide Lindqvist's journey is a huge part of his writing. Without his unique background, perhaps his writing wouldn't be as idiosyncratic, detailed and varied as it is. His interest in the fine lines between myth and reality, and in illusion and the art of magic, is evident throughout his body of work. In fact, these interests are often what sets his writing apart.

Let the Right One In was Lindqvist's first published novel. Set in the 1980's in a blue collar suburb of Stockholm (Blackeberg) the story centres on Oskar, a bullied and lonely twelve year old boy who lives with his mother. His father lives in the country, and the relationship between him and his son is strained. A young girl, Eli, and her father move in next door to Oskar, and the two strike up a friendship.

All very normal (whatever that is), except that Eli is a vampire and her “father” a man who aids her in attaining blood to feed on. The relationship between Oskar and Eli is somewhere between Platonic and romantic, but there is an air of ambiguity and doubt about many of the motivations. Some characters' driving desires are not ambiguous, though. Explicitly so. The novel is shocking in places.

Where the brilliance of the story lies is in its subversion of the vampire as a symbol of male penetration of women. Rather than a forceful ghoul, Eli is a sympathetic character, something of a lost soul; an animal capable of love, and yet still a bestial being in many ways. Eli is both victim and perpetrator, Oskar a lifelong weakling who falls for her strength. Love, in whatever form, is a powerful theme throughout Let the Right One In.

At over 500 pages, Let the Right One In is much like Lindqvist's other work*, a lengthy page-turner. He constructs a thoroughly immersive, believable world where the supernatural and natural blend seamlessly. Lindqvist does this using detail, picking out small things, quirks and ideas which make his writing easy to engage with. Let the Right One In is an excellent read, but those going to see the 2008 film having read the book first were in for a bit of a shock. 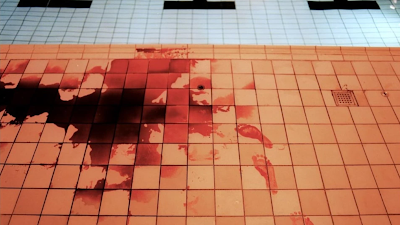 “I'm twelve, but I've been twelve for a long time.”

Eli, Let the Right One In

Tomas Alfredson directed the Swedish language cinema outing of Let the Right One In, and it swept into the public domain on the back of glowing reviews. It is an excellent film, superb in its own right. It is also a very stripped back version of the text, the perfect example of leaving out all the fine detail a book carries; precisely what I meant at the start of this piece in stating that a novel and a film have very different experiences and purposes.

The screenplay for the film was written by the author, Lindqvist, so it shouldn't really be shocking that the right bits were left out; keeping the essence of the story and making Let the Right One In its own piece of entertainment. It just required some readjusting for fans of the book, namely, in this case, me. The film is incisive, taking the life blood of the novel, removing only the prime cuts needed or wanted by a cinema audience. However it did take me a while to adjust to that.

Lina Leandersson carries a world weariness that is unmatched in the English language remake by Chloe Grace Moretz. On film, Leandersson's Eli is a majestic, terrifying predator. Moving with grace, purpose and precision at all times, even when not hunting. Kare Hedebrant gives Oskar a youthful naivety, which paired with his new friend, creates an odd couple which works as a very offbeat love story.

Crisp and cold like Swedish snow, there is an air of realism about Alfredson's Let the Right One In which fits with the novel. Stylistically somewhere between a few genres, it strikes a delicate balance both visually and thematically, straddling romance, horror and coming of age; all whilst blending brutality and beauty. An ethereal quality allows the supernatural to take place without feeling forced, or subject to elongated exposition.

Much of the novel doesn't need to be in the film, however much one (me) might have wanted to see it there. Let the Right One In would make for a good TV show, but it is one not needed now that the film has proved so successful. Lindqvist's second novel Handling the Undead would be perfect for television, and has been in pre production for years. Alas, this does not bode well. The story does for zombies what Let the Right One In does for vampires.

Lindqvist's above words were carefully chosen, one suspects. He's not wrong, in the sense that Let Me In (2010) is very much an American film, but whether it is wonderful is more subjective than that of its Swedish parent. Matt Reeves (Cloverfield, War for the Planet of the Apes) directed the film, which stars two famous child actors. Chloe Grace Moretz and Kodi Smit-McPhee play Abby and Owen (Eli and Oskar).

Perhaps what Lindqvist meant about Reeve's take on the Swedish film is that it shifts in tone, not narrative. Let Me In is a direct descendant of the Scandinavian big screen version rather than the novel- Lindqvist's original screenplay is credited for a reason. The American movie is gorier and yet somehow feels more sanitised. It is an expensive way to pointlessly reproduce a good film; Let Me In adds nothing to either the novel or film of Let the Right One In. 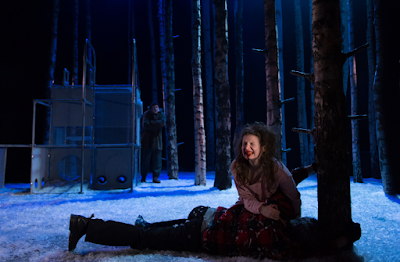 Even more stripped back than the Swedish film, the British stage production relocated Let the Right One In's story to Scotland. There was also a Swedish version, first on stage in Uppsala, which John Ajvide Lindqvist had a hand in. The interpretation shown at The Apollo in London's Shaftesbury Avenue was originally the Dundee Rep Theatre's adaptation by Jack Thorne and John Tiffany.

The play focused more than any other version of the story on Oskar and Eli, with a sparse yet striking set design and a chilly, snowy aesthetic. There was a balletic feel to it, Eli was graceful and fluid, nimbly scaling the apparatus and trees on stage, believably otherworldly. All without need of a computer. Let the Right One In was something of a treat in the theatre.

The stage production was again a direct product of the film, but logically so. Made in a way which wasn't derivative, more acknowledging, of the source it sprang from. Let the Right One In leapt back in to life through it.

Lindqvist writes horror from reality. He scares through what he himself cares about. Love, loss and the fear of loneliness. These are all evident in his other novels. To give an idea of the man's mentality, here speaking of losing track of his son in a forest he said,

"My thought at that moment wasn't that a bad man had taken him, or that he fallen and broken his neck. It was that he had actually disappeared. I never deserved to have him, and now he had been taken from me. He had just vanished".

What the better productions of Let the Right One In have done is pick out the humanity and strip the fat from the bones, leaving a lean, yet tasty and innovative film or play. The book is a very different experience to the screen and stage outings, but none does the other a disservice. Rather, they compliment one another, like Eli and Oskar. A beautiful cascade of storytelling and excellent example of why page and screen are distinctly different but both brilliant when done well.

*Handling the Undead, Harbour, Little Star and Let the Old Dreams Die are all also excellent.