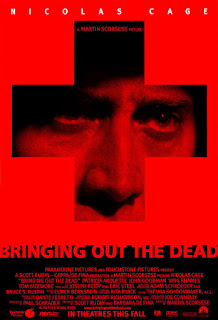 Tagline: “Saving a life is the ultimate rush” Which I must say having watched the film, is spurious, because it's not really about the rush of saving lives, although it does get a brief mention at the start.

Premise: Nicholas Cage plays a burnt out paramedic Frank, haunted by visions of a homeless girl who he couldn't save, who answers a cardiac arrest at the house of Patricia Arquette's Mary's father.

Execution: Happy Christmas to you, I hope this blog finds you well, and indulging in a brief sojourn from the madness of the festivities to (hopefully) enjoy some film based escapism. I said I'd do some festive film reviews, and I am true to my word on this with Bringing Out the Dead, believe it or not. Not one most people know, but it is a Martin Scorsese film, and fewer still will know that it is a very subtle reworking of A Christmas Carol. I'm not being facetious, it really is,

Nic Cage's Frank is at the end of his tether, drinking heavily and barely making it through each shift as a paramedic. He's assigned to work with three different guys riding shotgun; past, present and future, although it's not as obvious as that. It's as gentle as The Green Mile is about being the story of Christ. Again, look it up, it absolutely is. Frank has a developing relationship with Arquette's Mary, and there is a glimmer of hope in his future.

Brilliantly shot, well acted, gritty and believable, Bringing Out the Dead is also very funny in places. Ving Rhames' Marcus preaching to junkies while Frank revives an overdose is wonderfully cynical and outrageous. If you've ever worked in healthcare, you'll know gallows humour is rife among those who see and deal with such difficult situations on a daily basis, and the humour in the film is used like the humour in real life, to get you through everything else. Bringing Out the Dead also confronts, rather eloquently, the brutal and difficult fact that some people just do not want to live any more, and how hard that can be to see and accept, particularly for loved ones.

Bedsit it? Fun fact, Bringing Out the Dead is the only Scorsese film of the 1990's not to receive an Oscar nomination, and it's probably one of his less well known and acclaimed works. That's a bit of a crime, because it's a very good film. A brilliant film, in fact. I know it's a tenuous Christmas link, but it counts. I'll leave you with a lovely quote from the script. 9/10