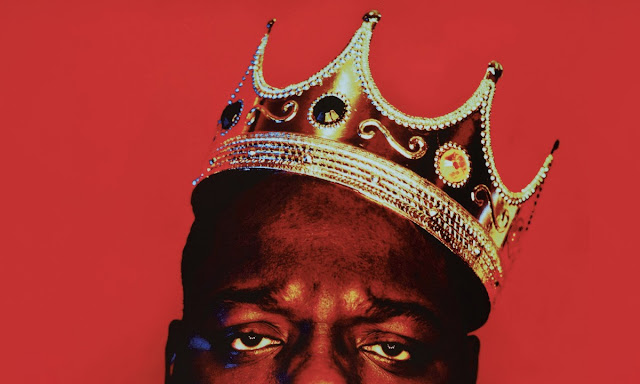 Biggie: I Got a Story to Tell (2021)
Documentary/ Biography/ Music
Rated 15
Netflix

2002’s Nick Broomfield documentary Biggie and Tupac was not Broomfield’s finest; his 1998 effort Kurt and Courtenay had some actual substance. Biggie and Tupac was essentially an English guy with a microphone strapped to his chest like a furry cinematic sex toy going around pissing people off, which was really only fun when it was Suge Knight he was pissing off- because Suge Knight is a wanker.

In 2009 George Tilman Jr. directed Notorious, which was nothingy, if I’m honest. So that’s all I have to say about that.

Biggie: I Got a Story to Tell dropped on Netflix earlier this week, and it boasts a great selection of interviewees (including B.I.G.’s “moms” and his now 96 year old Grandmother). One review I read of it talked about the film focussing on his life rather than his violent death, a still unsolved murder, at the age of 24. It’s easy to forget he was that young when he died given the legacy he has and how much of his music has been released posthumously.

Ready to Die was the only album Biggie was alive to enjoy the success of. He’d be approaching 50 now and Biggie: I Got a Story to Tell features many of his childhood/ lifelong friends and those he worked with. Obviously Tupac was unavailable for comment and fortunately the filmmakers haven’t given Suge Knight a mouthpiece, but those shown are well chosen, well spoken and enlightening. 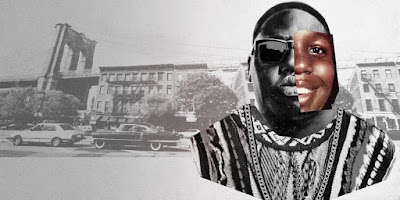 Clearly a hugely intelligent man, Biggie and all of his group of friends mostly come across as smart people. Not that it should be a surprise but when you consider the gangster culture they deliberately perpetuated and lived, and I’ll be honest the prejudice that poor people selling crack might be dumb, seeing quite how above the rest Christopher Wallace was is eye opening. There but for the grace of God, my Catholic friends like to say. Biggie made the best of a rough deal, and then some. Seeing how he did it is fun.

Learning about his instrumental influences from his Jamaican roots and Jazz are so well weaved that this documentary elevates itself above mere platitudes. It pays to see it rather than listening to me smacking babies at their Christenings. The power of his performing will blow away even the uninitiated; the big man projected presence.

There is an argument that B.I.G. lived “the life” more than 2Pac. This is not my condoning or falling in favour of trappin and killing. Biggie was a voice rising out of anguish and trying to escape the life he found (and at points indulged) himself in. It’s rather sweet and touching, though, to see his excitement at leaving New York when successful, seeing mountains and the clear love and joy for his daughter. The love of his "moms" Voletta Wallace just oozes through his existence, particularly in his harder times.

Tupac, while brilliant and also not from a privileged past, always somehow screamed of an intelligent man on the outside trying to gain gangster status. Self destructive rather than self content. They both died, their intelligence snuffed out by those with less artistry than them.

Christopher Wallace was executed after Tupac Shakur, and like all killing it was an avoidably sad conclusion to a life. This film manages to paint something of an uplifting story of the man, it sends a good message and so it should. Why focus on the bad when there is so much good in the story to tell.

Thoroughly enjoyable and while it is not hard-hitting, Biggie: I Got a Story to Tell has plenty of interesting anecdotes and facts of Christopher's life to enlighten even any Biggie fan. Oh, and lots of his music, to savour. 7/10

Music? It has so many strings Bedsit Cinema has to be called a Harp...
PAVAROTTI
WHITNEY
ROCKETMAN