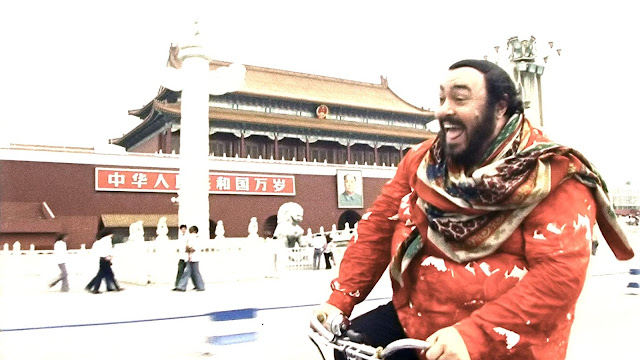 
Pavarotti is not someone I ever really knew much about, but I was aware that he was an interesting character and phenomenally talented tenor. There’s also that famous song what he done, with two other blokes, that I never know the name of but always recognise immediately. Oh and that headline The Sun ran about him and Elton John, “The Tenor and the Nine Bob Note” which always makes me laugh but not Elton who I think sued them.


There you have the sum total of my Pavarotti knowledge prior to watching the Ron Howard directed documentary, Pavarotti. Luciano Pavarotti. This was the first thing I learned from the film; I’d always assumed he was just called Pavarotti with no other name, like Madonna and Prince and Hitler. Pavarotti’s first name was Luciano and from there the floodgates of information opened.


While opera is far from my go-to choice of artform, in that I have never been to or seen a full one in any way, shape or form, I do like a bit of proper music and was even in a choir for some years as a teenager. My love of “classical”, which I realise isn’t what all of it is called but that’s what everyone calls it so get over yourself if that bothers you, music has remained into my old age.


I wish I could say that it doesn’t matter whether you can tolerate opera or not to watch Pavarotti, but I’d be lying, it’s pretty key that at the very least it doesn’t assault your ears and make you want to leave the room. It’s very hard to watch a film from a different room. If you do like opera, you’re gonna love tha banging tunes on Pavarotti’s soundtrack bruv. 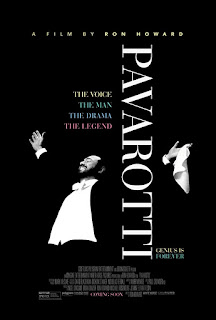 The man himself is/ was so captivating, and the documentary is very much a love in, which is no bad thing as apart from being a glutton and a little bit free and easy with his approach to fidelity he genuinely comes across as a very nice bloke. In fact his personality (and talent and money) is probably how he was able to land so many women, unless there really are people with a Sumo fetish in Italy. He was a bit of a diva and unsurprisingly, really liked his food.


While not blown away by any revelations I was very much enjoying Pavarotti and then… Oh fuck me, Bono rocks up and within ten seconds of opening that gateway to hell he calls a mouth is talking about himself. I hate Bono and this forced me to turn the film off, until I realised that I could just fast forward through the smug bastard sniffing his own farts.


Two hours really don’t drag, especially if you fast forward through Bono’s little bits, and though there’s largely a lack of conflict or scandal, Pavarotti is a very entertaining film which doesn’t really need either of them.
Bedsit it?


Yes, Pavarotti is fun, easy to watch and the man himself was as magnetic with his personality as he was with his voice. 7/10
You want some more reviews don't you, you cine-slut. Try these other Bedsit Cinema ones!
GOTTI
ESCOBAR
UN PROPHET
ROCKETMAN
SKIN