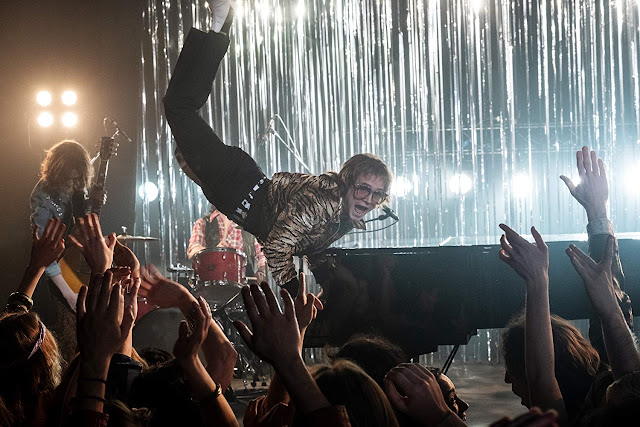 Those who know me, and the four people who read this blog are aware that I hate musicals. Hate them. Interrupting the narrative for a prance around and a sing song, ugh. My disgust at La La Land is well documented on Bedsit Cinema, you four know that. Nobody told me Rocketman was a proper musical; I thought it was a biopic which would heavily involve Elton John’s music. Which I suppose it still is. But.

I absolutely loved Rocketman. I beamed with joy, I even sang along- the Blu Ray genuinely has a sing along option but I'm not quite there yet. Shit I’d have danced if I wasn’t tethered to the projector by headphones. Both the projector and I do not do Bluetooth. Bluetooth is just more apparatus to charge and therefore run out of battery at inconvenient times.

Dancing was also off the table because I can’t dance (or sing if I’m honest), and rocking around your room in darkness and silence is mental. And I’m not mental… Oh wait.

Elton John has a strong, if not entirely influential, hand in Rocketman. Writing your own biopic could be risky, but the film far from paints Elton as a saint. Sure he’s a genius in it, but Elton John is a genius, and a larger than life ego. It would have been odd as a gritty drama. No no, it would have been appalling as a gritty drama. If only Bohemian Rhapsody had been this good. I didn’t write my notes from BoRhap into a review because I was so upset about it: it is a turd even Rami Malek’s wonderful performance can’t save.

As performances of a real person go, Taron Egerton as Elton is fantastic, energetic and engaging in the way he captures Elton without being an impersonation of him. Will Smith was great as Muhammad Ali but it was the polar opposite of what Egerton does in Rocketman. If that makes sense. Rob Stark Richard Madden is all kinds of charming and slippery as John Reid and on that note...

Spoiler alert, Elton John is gay. I only say this because if you didn’t know going into Rocketman, you’ll have a rather eye opening awakening to that. Of course if you’re watching in Russia you’ll probably finish watching the re-edit just thinking he’s a married man with a flamboyant choice in clothes and great songs. Russia are not cool with the gays, which is a shame because they have the most homoerotic leader in the world*.

*Not including Kim Jong Un of course, but I guess he’s more of a fetish sub-genre.