Jumanji: The Next Level (4D!)
Spoiler Free
Action/ Adventure
Rated 12A
Out now in cinemas

When Jumanji: Welcome to the Jungle was announced, first in this latest series and re-thinking of 1995’s Jumanji starring eternal genius Robin Williams, I was sceptical to say the least. These eyes need feeding though and the brain needed to switch off for a couple of hours. I put it on and really rather enjoyed it. My only complaints were that the CGI was a little ropey in places and it was too long.

Jumanji: The Next Level is no less lengthy, but I was enthused about seeing it, not least because my friend and I went to see it in 4D! Four dimensions! It's like Sci-Fi.

I mean, sure, we almost ended up seeing Frozen 2 after sitting down in the wrong cinema for ten minutes, but we got there eventually. Perhaps we are a little unqualified for all those dimensions.

The set up is roughly the same as the prior movie, teenagers get transferred into an old video game (called Jumanji) where they are assigned characters. The characters are played by the main stars, those being Dwayne Johnson, Kevin Hart, Karen Gillan and Jack Black. The Next Level mixes this element up well, bringing in the two Dannys- DeVito and Glover as well as alternating the body swaps for more Jumanji jungle japes.

The team then have to solve problems and battle baddies. Pretty straightforward.

Two elderly men trying to understand what was going on was fun- as was watching the actors playing them playing their character. Awkwafina (genuinely her name) does a brilliant Danny DeVito. Get her on It’s Always Sunny in Philadelphia. Everyone else was perfectly fine though one other actor stood out. 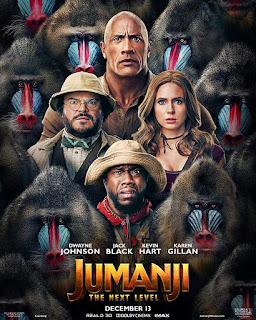 Nick Jonas has really impressed me of late, all I knew about him until now was that he used to be in that awful Christian boy band. His performances in The Next Level and even more so in Midway (where he’s excellent) are erasing my contempt for his music career. He’s very versatile, provided the character is insanely good looking.

The Next Level, much like a video game, jumps from set piece to set piece, with varying success. The monkeys and ladders scene was incredible fun though (CGI much improved), particularly as the seats swivelled and juddered and swooshed. That was all part of the 4D enjoyment, which while gimmicky did add some wow.

Let’s be honest here, Jumanji: The Next Level is a crowd pleaser aimed at families and 4D is a novelty aimed at families (excluding pregnant women). Both were exactly what they promised to be, and that's no bad thing.

See it in 4D! My only gripe about 4D was that it almost cost me a beer and thus dry trousers. The cinema is going to be the best place to see Jumanji: The Next Level. It was great entertainment that will most probably depreciate with a home viewing. Trying to recreate 4D at home could be fun however...

Jumanji: The Next Level is a bit Indiana Jones-Lite, but still fun. 6/10