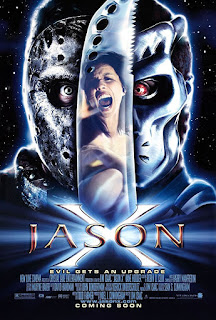 Tagline: “Evil gets an upgrade.” If this is an upgrade I'd hate to see whatever film came before Jason in Space... Just looked, it's 1993's Jason Goes To Hell. So space is an upgrade for evil on Hell is it? Ok. Let's see what you've got Jason X.

Premise: Jason Voorhees is frozen in what was in 2001 when this was made probably futuristic sounding 2011. Or something, I wasn't really listening. His gristly meat popsicle is discovered alongside that of the girl who froze him by a team of, what are they a team of? I think they're maybe supposed to be scientists. Or students. Maybe librarians? They all look really young. Anyway it's hundreds of years (“4.55 centuries”) later and everyone lives in space now because guess what, we fucked earth up. At least that bit is believable. The space baby crew wake both Jason and said future-past woman up and oddly enough, people start dying.

Execution: Jason X came onto my to watch list because I asked my social media friends/ followers to throw me some recommendations. I got some good suggestions, some sadists inflicting musicals on me, and this. This arrived first. I have to admit there was a small part of me which was quite excited about watching a cheesy slasher film, sequel number godknowswhat in a series. The same little bit that hopes beyond hope that it'll be a “good” bad film. I was never holding out for any more than that. I mean, they'd already taken Jason to Hell and Manhattan (don't ask) so Jason X is really where they were running out of ideas. Just FYI, you really don't need to have seen Jason Goes to Hell or Jason Takes Manhattan to understand Jason X.

The first thing I noticed was the look of “the future” and space, why is it all badly done sci-fi, from whatever era, just ends up looking camp as a row of tents? Anyway the future team defrost their finds, have sex with each other, simultaneously ejaculating clumsy exposition all over your face so that you vaguely know that one of them is a professor (which still doesn't help the conundrum of whether they are scientists, students or frozen meat librarians) one is a robot, one a soldier and the others all have working sexual organs.

I really can't go into the plot of Jason X. No, I mean I really can't, there isn't one. Jason sort of pops up in various random space scenarios and murders people. Sometimes in quite cool ways, mostly just in a very static, bloody way. It's not scary at all, with no tensions to speak of. In fact one of the things which kept me watching was that in places there are some rather well crafted laughs. Jason X is so jokey, camp and unmenacing it looks and feels like Scooby Doo, as costumed by Jean Paul Gaultier.

Bedsit it? Surprisingly enough, unlike most of the cast, I made it to the end of Jason X. There are, for all its faults, some quite quirky, neat moments in this and between those flashes of ingenuity and its levity I was amused enough not to turn it off. The director was an effects man by background, and that shows as he works wonders with what looks like a tiny budget. Frozen face may well be a contender for death of the year. 4/10 – with the disclaimer that if you aren't able to knowingly sit through a bad film in the hope of a few good moments (I'm looking at you, Mr B.) then don't bother.
Labels: Action Bedsit Bedsit Cinema Cinema Film Friday the 13th Horror Jason X Nudity Rated Sci Fi