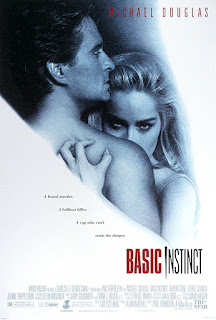 Tagline: IMDb lists “Flesh Seduces. Passion Kills.” Straight from the cover of Dead Dames Don't Talk this one. Like a murderous Mills and Boon novel, appropriate for the film, and way better than the poster effort,

"A brutal murder, a brilliant killer, A cop who can't, resist the danger."

Which is awful, it reads like a criminally insane Hallmark greeting. "I killed your sister, I killed your mother, I would've killed you father but the fucking dog got in the way and distracted me. Sorry about the mess!"

Premise: Michael Douglas is Detective Nick Currant, a man who has inexplicably risen to a decent rank within the police force and (just about) held on to it despite an obvious drink and drug problem, trigger finger leaving dead bystanders and a proclivity for bonking suspects. He shags, smokes and drinks his way through a murder case. Oh and Sharon Stone flashes, which isn't really plot, but let's face it, it's the thing the film is known for. It's really dated, Basic Instinct, with its quaint old pubes.

Execution: It's only week two of me writing this blog and I'm aware that already this is my third Paul Verhoeven effort. What can I say, I like Paul Verhoeven films. Having said that though, Basic Instinct is not the best one I've taken it upon myself to review. It's not bad, particularly, it's just silly and puerile. It has the feeling of a film which was written initially by a horny fifteen year old boy, then given a once over by someone more mature, but who was tired and couldn't be bothered to cut out half of the graphic nudity and violence. Which might explain why I thought so much of it when I last saw it as a teenager.

Basic Instinct probably qualifies for its 18 rating in the first five minutes, everything after that is just bonus muff. Michael Douglas's character is so ridiculously messed up and inept that it's very hard to take the film seriously, and the female characters have two motivations, sex and murder (although there are sub motivations, such as drug fuelled sex! And drug fuelled murder!). Having said that, Basic Instinct isn't really a film which wants to be taken seriously, it's B- Movie mayhem with A list stars.

I must say I'd forgotten much of the plot past the infamous interrogation scene, clearly the adolescent me short circuited at that point, and my mind is a blank after it. But it gets a little intriguing. Some of the violence, as you'd expect from Verhoeven, is brutal and for the most part believable. Sharon Stone spends most of the film in the nuddy and Michael Douglas shows us how he got that throat cancer in pretty graphic detail. This is not high brow entertainment, but it is the perfect hors d'ouvres to an all night bash at Bertrand Russell.

Bedsit it? Basic Instict does exactly what it says on the tin, and except for a ropey ending is pretty fun and engaging, it's just a bit schlocky. 6/10