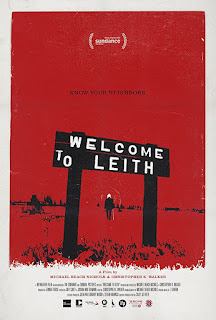 Tagline: “Know Your Neighbours” It ain't curtain twitching when they're cunts! I believe that was my nan's next door neighbour's motto. If that woman is still alive, she definitely checks an empty yard 10 times a night. "just in case". Mad old bint.

Premise: A documentary, available on Netflix, about the small town of Leith, North Dakota, where white supremacists started moving to the area with a devious and terrifying aim.

Delivery: After my seizures I had zero attention span, I rewatched Friends on a loop like a lobotomised chimp on a heroin binge. It wasn't for about a week until I managed to complete a film, and Welcome to Leith was that film. I had seen it recommended on Netflix, but from the title mistook it for Sunshine on Leith, so swerved it, because that looks proper flacid*. It is not, Welcome to Leith is a flouncy, feel good musical about bonnie Scots, this is a documentary about what happens when racists try to colonise your town.

Craig Cobb, it is no stretch to say, is a cunt. But, somewhat controversially, he's a clever cunt. After he moves into Leith he keeps to himself, confusing the friendly locals who think he's probably just a bit of a loner. Nothing could be further from the truth and while I'd love to talk about the film to anyone who's seen it, because it is fascinating and gripping, I don't want to spoil what's going on in it, all I will say is it's kinda smart what Cobb's done, which makes it all the more terrifying. Just watch it, and get back to me.

What Welcome to Leith does really well, is try to be even handed and show both sides. I know it's hard for people to see white supremacists as humans, because they're pricks. Human pricks, however, who suffer the same emotions as the rest of us; emotions such as sadness, and love (for whites only though, obviously). The doc isn't long but it's a brilliant insight into a news story that didn't make it across the pond.

There is also one massive oversight by said pricks, and a Mars bar for anyone who spots it.

Bedsit it? If you have Netflix, you have no excuse not to. It made my frazzled grey matter refocus for 90 odd minutes. 8/10