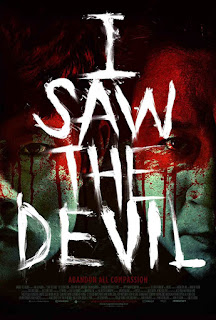 Tagline: “Abandon All Compassion”. Way ahead of you mate, I have a philosophy degree.

Premise: A Korean cop, distraught at the death of his wife by the hands of a serial killer, decides to seek vengeance. His retaliation is brutal, unorthodox, drawn out and decidedly more deadly as it unfolds.

Delivery: “Remember, your nightmare's only getting worse.”

A reminder of all human existence, both individual and global, the above quote also sums up the descent into misery I Saw the Devil depicts. It is billed and presented as a horror, I assume mainly to put off the squeamish. That advertising is slight misdirection, as it all is, because there is much more to the film than outright terror; though it has that in spades. It could be called “I Became the Devil”.

Two of Korea's top actors, Byung-Hun Lee as cop Kim-Soo and Min-Sik Choi as the serial killer Kyung-Chul head up the cast. Both are excellent but Choi's turn as the depraved murderer reminded me of the subtlety Bruno Ganz was rounded on for his depiction of Hitler in Downfall. In short, he creates a monster of entirely human proportions. If you don't know much about the films of Korea, you need to. Not North Korea, obviously, theirs are a little misleading. The Host, Memories of Murder, R-Point, Oldboy, Chaser, Train to Busan, the list goes on. Something for everyone; provided you like death and misery!

I Saw the Devil made me think it might be an allegory for state execution, as one killer is hunted by a vengeful one. The presumption is that what Kim-Soo is doing is morally justified. To an extent it is, but. His trying to prolong the torture, whilst dramatic and exciting causes other people pain, and actually to be fair the film recognises that. So I'll shut up there. Director Jee-Woon Kim does amazingly well with a tricky plot to present evenly. But essentially it is killer versus killer and it is very exciting to watch them lock gory horns.

However, I cannot stress how deeply disturbing and incredibly graphic if you aren't inured to the kind of film I Saw the Devil is. Even if you are it remains eye opening. Truthfully, despite the marketing, it is a composite of several different genres blended expertly. I wouldn't call it an out and out horror, as there's action in it too. It is, in places, often very funny; and while compared to Seven, it is miles better than that film. It's an inverse Seven, narratively. This is a very unique film, one which whether you whither before it or are encaptured by it, hinges closely on your stomach and dare I say outlook.

Bedsit it? It's more upbeat than Memories of Murder, half of which makes me depressed enough to reconsider having put it on. Often a film I gave a 9 on first viewing, will only go up with longevity. While not for everyone, I Saw the Devil is now a solid 10 for me. 10/10: if it sounds like your bag of bloody beans: Bedsit it.