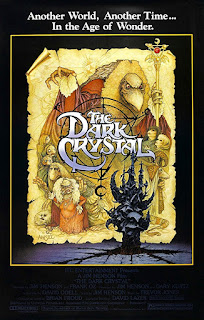 Tagline: “Another World, Another Time... In the Age of Wonder.” For those curious, The Emoji Movie was set in the Age of Money Grabbing and Indifference.

Premise: Fantasy children's tale from Jim Henson of Muppets fame, and Frank Oz, best known for voicing the most famous puppet ever, Yoda. A greedy and evil ruling class of bird-lizards is taken on by a young Gelfling, a sort of elf, as a prophecy looks set to come to light.

Delivery: From the very start the world The Dark Crystal presents is believable and doesn't sugar coat anything. Basically, it talks to children like adults, capable of understanding what mortal danger is. Remember Bambi's mum dying? Nobody ever said that was inappropriate. Ok not true, some people did; but they were all deer hunters with guilty consciences. Probably. It's nowhere near as messed up as Return to Oz, although it's just as imaginative. The eighties really was a strong period for big budget, original film making. Mainly because (in my opinion) the studios hadn't alchemised a perfect concoction for repeat success and/or had the technology to make superhero films convincing enough to churn them out ad nauseam.

It's a bit like how in the UK, until people realised they could make money off of other's suffering, we had the NHS. The one not owned by Richard Branson. America, you sadly never even progressed that far, but hey, at least you got all upset when the Nazis got "better" than you at eugenics. After Tony Blair worked out how to profit on the greatest single thing this country has achieved, thereby ruining it, we entered a period of darkness much like that which the superhero age has damned film-making to. I stress, but I digress and we must progress.

The Skeksis are the malevolent ruling race, but I initially misheard their name as Skets. No way did rudeboys get that word from a Jim Henson film. Although coincidentally Skeksis and Skets are both unattractive bird-lizards with no morals. I'll get in trouble for that one*. The Mystics, who are good, each look like a giant, walking 70 year old man scrotum, and the Skeksis look like a 70 year old man scrotum with a beak. In some, particularly terrifying cases, sporting jagged teeth too. Jen is a Gelfling, raised by the Mystics and is part of a prophecy which scares the beaky bastard Skeksis right down to their fuck-me-but-come-on-my-back-boots.

As much as I make heinous jokes, there is an edgy side to The Dark Crystal. Much like many children's films there are little asides thrown in for adults, my favourite was, “today Jen's pipe gives him no comfort.” We've all had days like that mate. It's also hard to  remember while watching that this is a live action film, with no people in, most characters are costumes worn by real life humans. It's why it looks so much better than something like Thunderbirds, where they're small models on strings. The facial expressions are wonderful achievements in particular and as a concept and creation The Dark Crystal is a better film than 99% of what youngsters are expected to sit through at current.

Bedsit it? Are you a 34 year old man with no children? If so I suggest starting a blog so it doesn't look so weird, but yes. The Dark Crystal is an entertaining film which is still very good, although possibly less impressive than it was 35 years ago. It might scare younger kids, but from five up if they can't make it through without wailing, then you purchased an inferior product, take it back to the shop. Or shout at it until it stops being pathetic and learns resilience and a deep seated, festering resentment of you. Or not. I don't have kids. 7/10