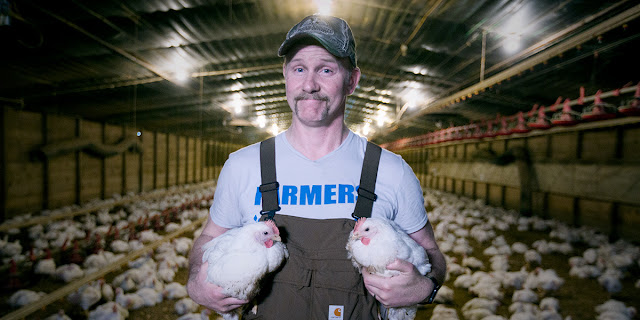 “If something seems too good to be true, it probably is”

As takeaways and Rustlers microwave burgers are all anyone’s going to be eating during this apocalypse (unless you were one of the arseholes who bought pasta by the tonne) when I saw Super Size Me 2: Holy Chicken on Amazon Prime, it wasn’t a hard choice of film. Mainly because I was hungry.

Hey kids, guess what, people lie to you. About everything. People will tell you that they love you, that you’re their real son, but worst of all they lie about food. Super Size Me 2: Holy Chicken (Holy Chicken from now on) reverses the premise of Super Size Me and makes Morgan Spurlock “the problem”, becoming the vendor not the consumer. Spurlock decides he wants to open a fast food joint, but he wants to do it differently.

This restaurant, in theory, will be organic and ethical and all that bollocks. Most of all though, Morgan aims to make his place honest, because Morgan knows people lie. Particularly fast food vendors. He bloody should know; in Super Size Me he choked himself half to death on Big Macs to prove a point. I didn’t need to do that to work out fast food is bad for you, but I am midway through a similar experiment with wine.

Certain things about Holy Chicken are interesting despite my efforts at being a culinary know it all. Big business has screwed chicken farmers, for example. Also they paint those char-grilled stripes on, which I kind of knew but good Lord it’s treacherous behaviour. The experts and outlets keep using the word “halo” which is a great byword for the falsity of description employed by fast food. For example, Subway lets you choose salad, giving their sugar and salt laden product a "halo".

A lie to make you feel better about eating shit. Eating shit isn't wrong, it's just you should  be aware of it when you're doing it. 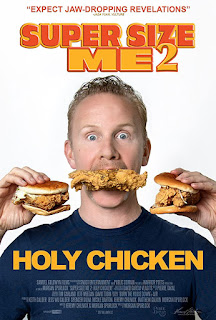 It was no surprise to me that marketing people are happy to rebrand “healthy” to serve their masters’ needs. Sadly, these people chow down on money like Jenna Jameson on you know what, it's all they care about and I’m sure Jameson has other interests. The best do what they do because, like Method Man, they could sell an Eskimo a fan. Morally bankrupt but with money in the bank.

As Spurlock, who is engaging and easy going as ever, exposes the fast food system quite literally from the ground up it’s hard not to be entertained. This shit applies in the UK too, so don’t be fooled that this is someone else’s issue.

Holy Chicken is an engaging but not hard hitting expose of big business and bigger lies; although I did like where it went in the end. I still went out and bought Rustlers burgers after watching, although surely there’s nobody who believes they’re holy healthy. Plus they’re the last bastion of sort of food before we're all eating Soylent Green.

It isn’t going to rock  your world, but Holy Chicken does get its point across well and entertain. It also serves more as an expose of the process of producing fast food rather than the effects of over eating it. Don’t eat too much fast food and don’t believe the lies. Beware of lies! 6/10