Requiem for the American Dream (2015) 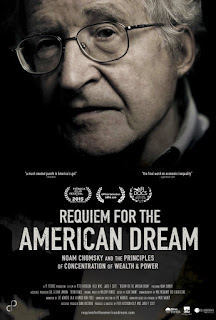 Tagline: “Who Wouldn't Stop It?” Everyone, sadly. Everyone wouldn't stop it. That bastard everyone.

Premise: A documentary I wrote notes on in its former residency on Netflix, where a few Noam Chomsky interviews are collaged to paint a picture of Capitalism which may or may not be to your agreement.

Delivery: “The tax system has been redesigned so that the taxes that are paid by the very wealthy are reduced and, correspondingly the tax burden on the rest of the population has increased.”

As Noam Chomsky calmly, convincingly lays out the ten phase way we're all being effed in the mother effing A; it's hard not to be swayed. The film sets out ten key points which conspire to denigrate any unity, or dare I mention- love, our populace may entertain, in order to achieve a selfish aim. I wasn't suckered, obviously, cos I'm super smart. He's ok, Noam, I guess. I only sent one letter, and I know he didn't receive it because he didn't write back.

What's so scary about Requiem For the American Dream, from a UK perspective, is that while this concerns America, we're now hurriedly chasing after their set up. That same set up which this film doggedly breaks down and criticises. Requiem systematically lays out how democracy and capitalism might not be all they're sold to us as, Chomsky is entertaining, insightful and (for me at least) a bastion of how the left can survive in the USA, given their fear of it.

The whole film is so well constructed and put together, the argument so persuasive. Noam could have told me to drown a child and you know what I'd have said? Did that A WEEK ago mate. Pay attention. What do you mean you don't read Bedsit Cinema? It's huge in academic circles (by which I mean I pester my former lecturers into reading). I'm kidding, I didn't drown a real kid, and Noam doesn't speak to me anymore. Not since the court order. Requiem certainly hinges on your personal politics, which you're welcome to, but I have been entranced twice.