Grand Isle scores a fairly fetid 4.6/10 on IMDb and I knew when I put it on I was in for either a hidden gem or another Nic Cage stinker; I also knew where the balance of probability lay. Cage has become something of a rotting corpse these last years, mostly staggering dead eyed through films, only impressing when the role calls for a cadaver.

How old would you say Nic Cage is? Go on, guess. No cheating. I played this game with myself and I came up with 60, then decided that was well out and moved to 65. I only mention this because it was what occupied my mind for a good ten minutes of Grand Isle before I caved and checked. In fact, Nic Cage is 56. Back to the film. 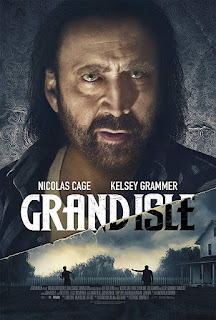 Half an hour in and Grand Isle had become an endurance test as Nic Cage raged about with no discernible reason disclosed. I think there’s supposed to be some mystery to his tempestuous relationship with his wife, played by an actress whose name is even less believable than her acting- KaDee Strychnine Strickland. Both of this central, warring couple are annoying and I honestly didn’t care what that mystery might be.

Strickland attempts desperately to shag Luke Benward, who plays some eye candy trapped by the twosome in a storm (METAPHOR) while Cage drinks himself senseless. I wanted to do the same, but sadly I was watching Grand Isle before work. I might be tempted to admire Cage's attempts at energy, but I won't because even shouting he's still shit.

Forty five minutes in, Cage is having a flashback from ‘Nam. It is not even an entertaining flashback. He hurt his foot or something. How is Grand Isle an "action" film? Even the war scenes are Cage describing things that aren't exciting. I went for a poo, and on return it didn’t appear I’d missed anything.

Finally- oooh, something's happened! But I still don’t care. I’m stopping it. Play a game of "how old is that actor?", it's more fun than Grand Isle.

Today’s date is January 3rd 2020, and I have just seen the first genuinely awful film of the year/ decade! Well, just over an hour of it anyway, which was half an hour more than it deserved. 2/10