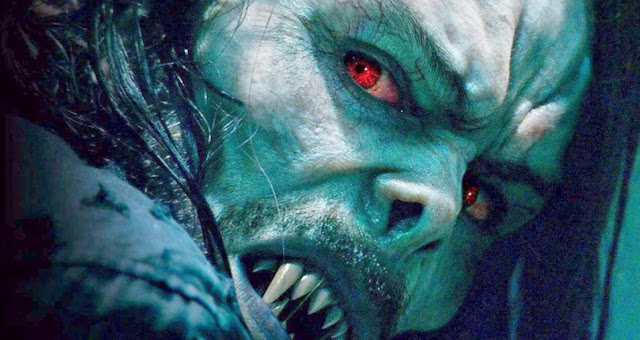 Action/ Horror/ Marvel (who might as well be a genre now)
Rated 15
Spoiler Free
If you only ever do what most people agree is the best course of action, you’d live a tedious life. Most people agree that Morbius is a bad film; I’ve seen constant complaints about it online and I almost didn’t rent it because of those moaning echoes in my head. Surely with expectations so low, I couldn't help but like it- such is life.

I love Jared Harris, he’s a fine actor but one whose presence doesn’t necessarily rubber stamp a film as quality. Harris plays a doctor who sort of acts as parent to two boys, one of whom grows up to be Jared Leto and the other Doctor Who. Leto’s Dr. Michael Morbius is the titular antihero. Fun fact, casting Leto actually saved the film money because he really does look like that when he’s not allowed to drink the blood of virgins*. Doctor Who, also known as Matt Smith, predictably becomes Morbius’ nemesis.

Do you like The Matrix, and vampires? Well, Morbius is basically those two films. I wouldn’t say it is better than Underworld, but it’s certainly no worse. That sentence is where you can stop reading if you were wondering whether this film is for you, by the way.

Morbius is one of the Marvel films which wants to not be a Marvel film and be more grown up. That’s fine, but a lot like Venom (which gets annoyingly referenced) it isn’t really very grown up, there’s just more explicit killing and swear words. Unlike Hellboy, which carries the same 15 rating, Morbius offers no fun for gore hounds like me- it’s basically bloodless. These are the cleanest feeding vampires ever.

While I complain vaguely, and to be clear, Morbius offers nothing new, it also isn’t worthless entertainment. In fact, while in parts it feels like a computer game, that’s actually a good thing. Director Daniel Espinosa made the very underrated Life, and clearly worked hard to make Morbius a bit different. That’s what happened with Venom, and look how different that turned out. With these films, if you think Marvel but with ever so slightly more adult presentation, I think that’s about the right level of anticipation.

Sporting two post-close credit clips, Morbius does nothing new, but doesn’t offend if you don’t expect it to be amazeballs/ aren’t an ardent comic fan. He’s sort of Batman, who can hear a gnat’s fart half a city away in a thunderstorm, half Dracula (also bats). He fights Doctor Who in big budget CGI contests and its noticeably filmed in England not America. 6/10
*This is a very mean way of saying Jared Leto looks amazing for 50, though given he’s the lead singer of a rock band, I bet he’s also tasted virgin blood.